Manoj Prabhakar, who was part of the Indian side when Sachin Tendulkar made his Test debut in Pakistan in 1989, said the just-retired batting maestro remained the same person throughout his "controversy-free" career. 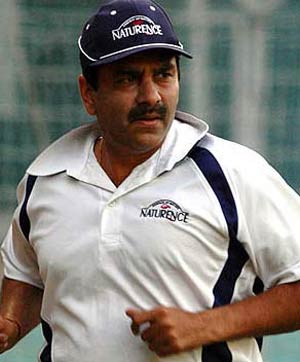 Some experts might have felt that India faced a spineless opposition in the form of the West Indies in Sachin Tendulkar's farewell Test series but former seamer Manoj Prabhakar on Tuesday said that the Caribbeans were a competitive side.

"West Indies were terrorising other teams during their prime. Though they lost badly in the Test series against India, they were still a competitive team. Nobody can say India got an easy opposition. India simply played better," Prabhakar told PTI.

Asked about Tendulkar's dazzling 74 he made in his final international innings, Prabhakar said, "Sachin had prepared well for the Test series by playing a Ranji game. The way he batted in his final innings was amazing. He wanted to make farewell memorable and he did that."

Prabhakar, who was part of the Indian side when Tendulkar made his Test debut in Pakistan in 1989, said the just-retired batting maestro remained the same person throughout his "controversy-free" career.

"Sachin served the country without any controversy in his 24-year-long career. He did his job everytime he played for the country. He never let the success get into his head and always remained grounded and was the same person as he was in 1989.

"He maintained the same discipline all through his life. He gave best years of his life for the country. His sincerity towards the game made him such a great cricketer," the 50-year-old Prabhakar said.

Prabhakar, who played 39 Tests and 130 ODIs for the country, recollected how Tendulkar would hit boundaries off yorkers at the beginning of his career.

"People talk about Virat (Kohli) and MS Dhoni hitting yorkers. But Sachin, as a 16-year-old, was a master of sending yorkers to the boundary. He was simply sensational," said Prabhakar.

Another former cricketer Maninder Singh said Tendulkar delivered a perfect farewell speech to bid adieu to the game. "Sachin was fantastic in his final innings. His send off was great. His speech at the end of the match made everyone emotional. I was expecting him to come out with an emotional speech," Maninder said. "What a great human being he is and it reflected on his speech. He brought smiles to millions of faces for many years. And his speech too made us smile," he added.

Comments
Topics mentioned in this article
West Indies Tri Series 2013 Sachin Ramesh Tendulkar Manoj Prabhakar Rahul Dravid Pradeep Sangwan Cricket West Indies Cricket Team India Cricket Team India vs West Indies 2013-14
Get the latest updates on IND vs NZ 2021, check out the Schedule and Live Score . Like us on Facebook or follow us on Twitter for more sports updates. You can also download the NDTV Cricket app for Android or iOS.