Even though new pavilions and stands have come up at the Green Park in Kanpur - the venue for the third and final India vs West Indies ODI, very little has changed for the general public and the media personnel had to face problems from uninformed cops, officials and bureaucrats. 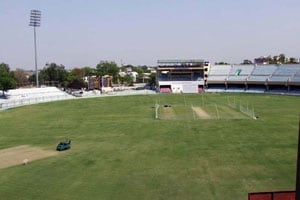 International cricket returns to the city on Wednesday after nearly four years with the third ODI between India and West Indies but the arrangements for match coverage left much to be desired at Green Park stadium due to mismanagement by district administration officials on the eve of the game on Tuesday.

Even though new pavilions and stands have come up at the Green Park, which comes under the state government's purview, very little has changed for the general public and the media personnel had to face problems from uninformed cops, officials and bureaucrats.

The mediapersons had to go through plenty of hardships to enter the stadium to cover the two teams' practice sessions and mandatory press conference on the eve of the match.

It was cops all around and even inside the ground. They were reluctant to allow journalists enter the stadium on Tuesday citing various reasons and even told a scribe that "your accreditation card mentions the match is on November 27, so why have you come today. We can't let you in. You can enter the stadium only tomorrow".

With tempers starting to flare up on both sides, it took an intervention from a top UPCA official to calm things down.

Once inside the stadium, things were no better as all entry gates to the pavilion or near to the two teams' practice nets were inaccessible.

To the disappointment of the scribes who are covering the match, the Media Centre was unprepared as there were no wireless internet connections available and when quizzed to an ignorant organiser, he simply said, "You will have to purchase wifi".

The scene at the media conference room, a prohibited area for all barring journalists and organisers was packed with general public, which prompted India's media manager RN Baba to say that "I don't see any journalists out here".

The poor photo journalists had to face the maximum difficulties as they were not allowed to go near the nets and had to shoot from a spectator stand which was at a distance from the nets.

Comments
Topics mentioned in this article
Cricket Green Park, Kanpur West Indies Cricket Team India Cricket Team West Indies Tri Series 2013 India vs West Indies 2013-14
Get the latest updates on Fifa Worldcup 2022 and check out  Fifa World Cup Schedule, Stats and Live Cricket Score. Like us on Facebook or follow us on Twitter for more sports updates. You can also download the NDTV Cricket app for Android or iOS.