Shikhar Dhawan has slammed his sixth ODI half-century. India are chasing 264 for a win and series victory. India and West Indies have won a match each 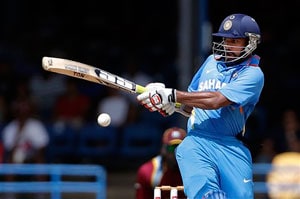 With the fate of the three-match ODI series at stake, opener Shikhar Dhawan led India's chase of 264 with a quick-fire half-century to put West Indies on the back foot at Green Park, Kanpur. In his customary fashion, Dhawan's fifty came in just 43 deliveries and included 9 fours. Interestingly, Dhawan's first 24 runs all came in boundaries. It is his 6th fifty in one-day international cricket and his first in the last five ODI matches.

After electing to bowl, Ravichandran Ashwin's two wickets and economical figures ensured that West Indies could post only 263/5 in their 50 overs. Kieran Powell, Marlon Samuels and Darren Bravo hit half-centuries for the visitors.

However, India's chase did not get off to the best start after Rohit Sharma (5) edged a Ravi Rampaul delivery to Dwayne Bravo at first slip. Rampaul dismissed Virat Kohli as well when the in-form batsman nicked a delivery to the wicketkeeper Johnson Charles. At that stage, India were in a spot of bother at 61/2.

However Dhawan, along with Yuvraj Singh, have ensured that India, 112 for two in 20 overs, remain on course for victory.