India vs Sri Lanka: The umpires held several inspections but the dampness on the pitch did not allow a single ball to be bowled. 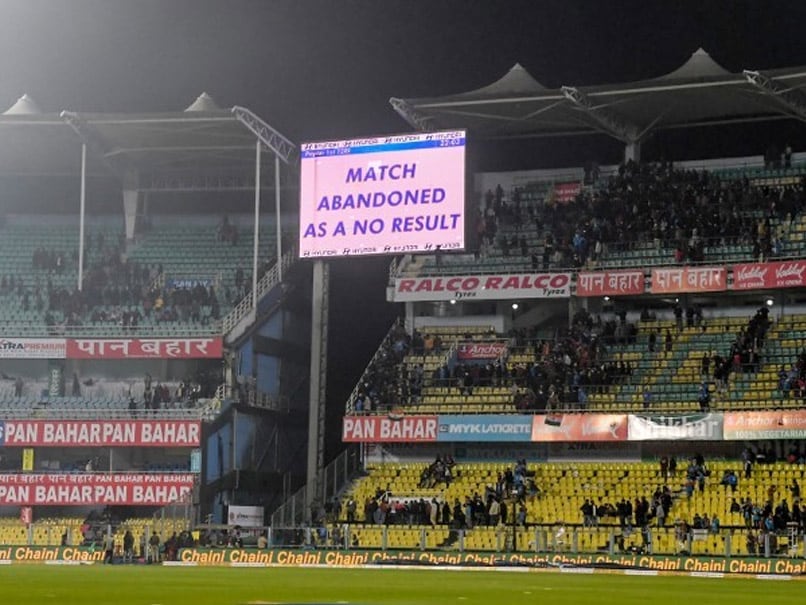 India vs Sri Lanka: The match was called off without a ball bowled.© AFP

The first Twenty20 International (T20I) between India and Sri Lanka was abandoned due to damp patches on the track, with Assam Cricket Association (ACA) groundsmen failing to prevent the rain water from seeping into the covers. It started pouring 15 minutes before the scheduled time after India skipper won the toss and elected to bowl. The umpires held several inspections but the dampness on the pitch did not allow a single ball to be bowled, much to the disappointment of a strong 35,000 crowd at Barsapara Cricket Stadium, which was hosting only its second T20I.

The cut off for a five-over shootout was 9:46PM but the outfield could not be prepared in time and match referee David Boon called off the match shortly before 10:00PM.

The groundsmen even used vacuum drier to remove the damp patches on the pitch but it did not help much after water leaked into the covers.

Terming it a "school-boy error", cricketer-turned-commentator Aakash Chopra lashed out at the ACA's negligence, while former India opener VVS Laxman called it an "elementary mistake".

"It's nothing but a school boy error. The 22-yard is a sacrosanct place and they have left a few holes in the cover as some amount of water seeped in. It is some amount of negligence. You can't have an excuse at this level," Chopra said.

ACA secretary Devajit Saikia feigned ignorance, saying he has no idea about the seepage. "Official reason is heavy downpour. Two spells of heavy showers did not allow the ground to be ready in such a short time," Saikia said.

"I've no idea about it. I've not spoken to the curator or the groundsmen. Once I speak to them, I will get to know whether there were any lapses," he added.

The groundsmen toiled hard for two hours, using steam iron, roller, and a big drier to clear up the dampness but it all turned out to be futile.

The second match of the three-match series will be played on Tuesday in Indore while the final game is scheduled to be held in Pune on January 10.

India pacer Jasprit Bumrah, who was out of action for four months due to stress fractures in his back, was named in the eleven by Kohli, who won the toss.

Lasith Malinga Barsapara Cricket Stadium, Guwahati India vs Sri Lanka, 2020 Cricket India vs Sri Lanka, 1st T20I
Get the latest updates on ICC T20 Worldcup 2022 and CWG 2022 check out the Schedule, Live Score and Medals Tally. Like us on Facebook or follow us on Twitter for more sports updates. You can also download the NDTV Cricket app for Android or iOS.