"Not My Headache": Shikhar Dhawan Reacts To India's Problem Of Plenty At The Top. Watch

While there is little debating that Rohit Sharma walks into one of the two openings slots in limited overs, the second is a straight up fight between KL Rahul and Shikhar Dhawan. 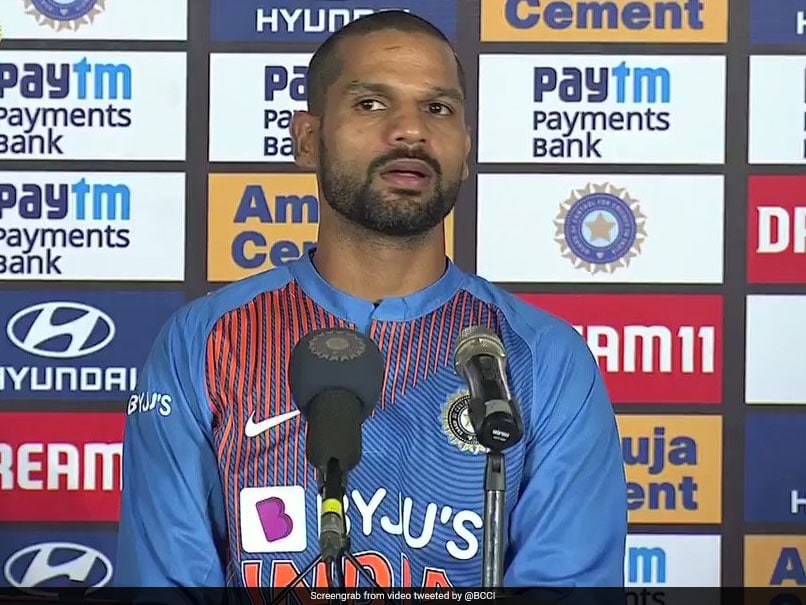 Shikhar Dhawan spoke to the media after India's emphatic win over Sri Lanka in the third T20I in Pune.© Twitter

The Indian cricket team has been on fire in recent times, blowing away one team after another at home. The top order led by Rohit Sharma has been firing on all cylinders with skipper Virat Kohli as consistent as ever in the middle-order. However, India's positive results and brilliant performances from the batsmen has given a selection headache for the captain and the team management. With T20 World Cup slated to begin in October this year, the Indian team will be looking to finalise their playing XI as soon as possible. But it is easier said than done with the two opening slots throwing up a problem of plenty.

Asked about India's opening conundrum after India's 2-0 T20I series win over Sri Lanka, Shikhar Dhawan said: "All three players are doing very well. For Rohit, 2019 was fantastic. Rahul has also done very well in the last two-three months and he is a very good player. And now even I'm there in the picture. I did well today (3rd T20I vs Sri Lanka on Friday) as well."

"Well, this is not my headache. So, I'm not thinking too much about it because it's not in my hands. I am happy that I did well in the two opportunities that I got," added the left-hander.

Two opening slots and three consistent openers? Trust @SDhawan25 to not take unnecessary stress. His job is to score runs and he is happy doing that. #TeamIndia #INDvSL pic.twitter.com/qYHicVBTDT

While there is little debating that vice-captain Rohit Sharma walks into one of the two openings position in limited overs (be it ODIs or T20Is), the second spot is a straight up fight between KL Rahul and Shikhar Dhawan.

Shikhar Dhawan returned to the T20I fold in the Sri Lanka series after an injury layoff and hit the ground running with scores of 32 and 52 in the second and third T20I. On the other hand, Rahul was the top run-getter in the series, scoring a total of 99 runs in two matches at an average of 49.50 and a strike-rate of 145.39.

KL Rahul grabbed his chances with both hands after coming in as a replacement for the injured Dhawan at the top of the order. The right-hander registered scores of 62, 11 and 91 in the T20Is against the West Indies, and 6, 102 and 77 in the ODIs.

He continued his fine form by scoring 45 and 54 in the second and third T20I against Sri Lanka.

Another thing going in Rahul's favour is that he averages 44.17 in T20Is as compared to Dhawan who averages just 28.35.

Thanks to his recent form, Rahul might just have stolen a march on Dhawan for the second opening slot but with time still remaining for the T20 World Cup, the latter has more than enough time to cement his place in the playing XI.

Virat Kohli India vs Sri Lanka, 2020 Cricket
Get the latest updates on IPL Auction 2023 and check out  IPL 2023 and Live Cricket Score. Like us on Facebook or follow us on Twitter for more sports updates. You can also download the NDTV Cricket app for Android or iOS.