Junaid Khan had an inexpensive economy rate and managed to claim wickets regularly to complete a successful tour of India. 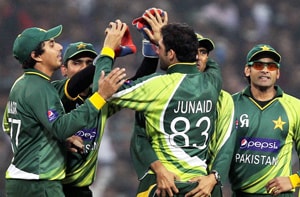 The most impressive among the Pakistani pacers who made life difficult for Indian batsmen, Junaid Khan revealed that the legendary Wasim Akram's inputs about the host batsmen's "weaknesses" helped him get eight wickets in the just-concluded three-match ODI series.

"I have been a bowler who has relied on bowling outswingers consistently at a good pace. It was Wasim bhai (Akram) who told me to develop the incoming delivery which would be my weapon against the Indian right-handers," the 23-year-old Junaid told PTI during an interaction before leaving for Lahore on Monday.

"It's very natural for left-arm fast bowlers to slant it across the right-handers. Once a guy like Virender Sehwag gauges the length of the away-going deliveries, you can be murdered. When I did my homework, I found out that Sehwag has a problem with the ball that comes in.

"I then started working hard on that incoming delivery with our chief bowling coach Mohammed Akram," said Junaid, who has played 8 Tests and 16 ODIs for Pakistan.

In the three matches, Junaid got Sehwag, Gautam Gambhir and Yuvraj Singh out once while he made Virat Kohli his "bunny" getting him out thrice.

"I was never under any kind of pressure to perform. I also got a lot of back-up from the other end as Mohammed Irfan and Umar Gul also bowled superbly. It was certainly a collective effort."

The man, who hails from the remote Abbottabad district in Pakistan, said that for him "swing is more important than pace."

"I don't want to compromise on pace but swing is the most important aspect of my bowling. One might get adjusted to pace but if one has the ability to move the ball consistently at a decent pace, he can create trouble in batsmen's mind."

The soft-spoken lad doesn't have any specific targets in mind and wants to serve Pakistan cricket for as long as possible.

"God willing and with support of my family and teammates, I would like to play for Pakistan as long as possible and try to contribute my hundred percent to team's cause," the youngster concluded.

Comments
Topics mentioned in this article
Cricket India Cricket Team MS Dhoni Yuvraj Singh Wasim Akram Sardar Patel Stadium, Motera, Ahmedabad Pakistan Cricket Team Junaid Khan India vs Pakistan 2012
Get the latest updates on ICC T20 Worldcup 2022 and CWG 2022 check out the Schedule, Live Score and Medals Tally. Like us on Facebook or follow us on Twitter for more sports updates. You can also download the NDTV Cricket app for Android or iOS.