With Pakistan needing 25 runs from the last three overs having two wickets in hand, Shami bowled a wicket-maiden to swing the match in India's favour. 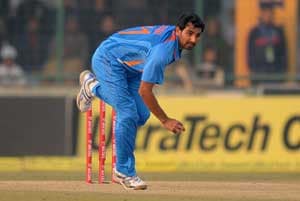 The 22-year-old on his debut against Pakistan in the third and final ODI at the Ferozeshah Kotla Sunday bowled a game-changing 48th over which gave India a 10 runs win in the dead rubber.

While Akram gave him valuable tips on how to reverse the old ball, particularly the white ball, Gambhir explained to him the importance of bowling the right line and length to an opening batsman.

"The small things that he's taught me have made me a better bowler. Things like bowling with the old ball, reversing it and maintaining it, which line to bowl when you're trying to reverse-swing the ball. He's taught me a lot when it comes to using the white ball," Shami said of Akram, who is also his bowling mentor in the Indian Premier League franchise Kolkata Knight Riders.

"As an opening batsman, Gauti Bhai (Gambhir) keeps telling me what a new ball should do to trouble the batsman. Every time I bowl to him in the nets (at KKR) he doesn't only concentrate on his batting. He makes it a point to give me honest feedback on every delivery, which helps me improve," Shami was quoted as saying by BCCI.tv.

With Pakistan needing 25 runs from the last three overs having two wickets in hand, Shami bowled a wicket-maiden to swing the match in India's favour.