Rathore and Karim, in turns, held discussions with Sehwag for more than 20 minutes each during the Indian team's training session at the Feroze Shah Kotla grounds here on Saturday. 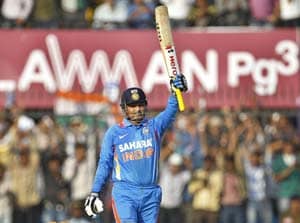 With speculation building over the likely axing of Virender Sehwag from India's ODI team for the home series against England, selectors Vikram Rathore and Saba Karim had a long chat with the under-fire opener ahead of the third and final ODI against Pakistan here on Sunday.

Rathore and Karim, in turns, held discussions with Sehwag for more than 20 minutes each during the Indian team's training session at the Feroze Shah Kotla grounds here on Saturday.

In between two batting stints at the nets, Sehwag was seen in a one-to-one conversation with each of the two selectors.

Rathore first spoke for more than 20 minutes after Sehwag had his first hit. After that Karim was seen having an animated chat with the beleaguered Delhi opener.

The two selectors, after some time, also had a discussion with Indian captain Mahendra Singh Dhoni, which lasted for around 15 minutes.

There has been intense speculation that one among Sehwag and Gautam Gambhir would be getting the boot when the selection committee, headed by Sandeep Patil, meet here on Sunday to choose the team for the five-match home ODI series, starting in Rajkot on January 11.

The Delhi duo have failed to provide a good start for some time now and that has hurt the team most.

Gambhir, though, might escape the axe on the back of hitting two centuries and two half centuries for 388 runs at an average of 38.80 in his last 10 matches.