It's unlikely that his wonderful century on Sunday (December 30) in the first One-Day International against Pakistan in Chennai will go any distance in redressing the balance, but Dhoni showed during the course of his eighth ODI hundred that when it comes to the crunch, he can still put mind over matter. 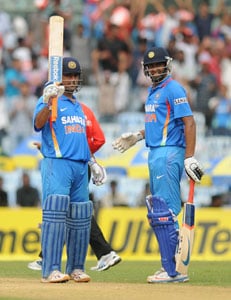 Mahendra Singh Dhoni isn't the most attractive batsman going in world cricket. He is not the technically most accomplished either. Sheer pace doesn't daunt him, but he has repeatedly been found out in conditions where the ball has moved around, either in the air or off the track.

Dhoni has been occasionally culpable in the past of not putting a price on his scalp, his looseness outside off stump exposed threadbare overseas. It's unlikely that his wonderful century on Sunday (December 30) in the first One-Day International against Pakistan in Chennai will go any distance in redressing the balance, but Dhoni showed during the course of his eighth ODI hundred that when it comes to the crunch, he can still put mind over matter.

He did that not so long back in Nagpur, in the final Test against England, producing an innings so out of character that it took many by surprise. On a surface that lent new meaning to the word 'sluggish', he battled on in the company of Virat Kohli, curbing his natural instincts remarkably well. India were on the back foot and battling for survival when they should have been trying to make a push for victory to square the series. Dhoni put strokeplay aside and made an unspectacular but revealing 99, an innings as precious as any of his centuries.

The conditions were vastly different at the MA Chidambaram Stadium against Pakistan. A pitch with no little moisture, heavy skies that facilitated swing bowling from a quality pace attack, an ungainly top-order collapse, a heavy defeat looming - Dhoni walked into all this and more with India on 29 for 5 through a combination of exceptional bowling and extraordinarily inept batting.

In the past, Dhoni has tried to counter-attack in such circumstances. He has backed his natural aggression to get himself and the team out of trouble, but he quickly sized up the situation and arrived at the conclusion that to hit out was not the most prudent course of action. The conditions did ease up a little as the moisture slowly seeped out, but Junaid Khan, Mohammad Irfan and Umar Gul continued to pose awkward questions.

Dhoni rode out the storm quite beautifully. One batsman after another had been dismissed playing expansive strokes away from the body, pushing hard at the ball even though it was yo-yoing around. Dhoni had learned the lessons, getting nicely behind the line and cutting out all frills for the first half of his most wonderful construction.

At times, you had to remind yourself that it was indeed Mahendra Singh Dhoni who was batting out in the middle. A heavy outfield was a contributory factor, but Dhoni didn't hit a boundary until his 79th delivery faced. He took 86 deliveries to reach his 50, having steadied the ship somewhat alongside Suresh Raina, and then upped the ante at the death, unleashing a barrage that sent Pakistan scurrying for cover.

It was only Dhoni's second hundred at No. 7 - the previous one had come for Asia XI against Africa XI at the same venue five and a half years back - and the first time it had come in a losing cause, but it did nothing but enhance Dhoni's reputation as one of the best limited-overs exponents going. Most of Dhoni's preceding seven hundreds have been bruising efforts higher up in the order - two of his tons have come at No. 3, one at No. 4 and the other three at No. 5 - but this was a truly workmanlike innings that was paced outstandingly well.

"It was a good innings," he said, typically self-deprecating. "It's not like I have got plenty of centuries to choose from, so all of them are very special for me. You don't want too many opportunities to score a century batting at six or seven because that means the top order hasn't performed well, but I am quite happy that I got a century."

Dhoni's knock won him the Man of the Match award, perhaps baffling a few, but that was because it turned a mismatch around and made a match of what was increasingly beginning to look one-way traffic. Junaid could have been the popular choice after blasting out the Indian top-order, Nasir Jamshed might have been another candidate for his scratchy unbeaten century in a winning cause, but the jury recognised Dhoni's essay for the circumstances and the manner in which it was made.

"With me at No. 7, there was only Ashwin behind me who could bat, and Bhuvneshwar a bit. When you are in early, at 29 for 5, what you want is the respectable score and that's we wanted to do," said Dhoni of his uncharacteristically restrained innings. "Raina and I decided to see off the new ball and wanted to rotate the strike against their spinners but we found it quite difficult because the ball wasn't coming onto the bat. And we were not in a position to play the big shots because if we had lost one more wicket at that time, we could have been bowled out for 100 or 120."

In the end, India managed 227 for six, on the back of Dhoni's century and crucial contributions from Raina and Ashwin. The three Chennai Super Kings boys came to the party at a venue they are so familiar with. It wasn't enough to ensure victory, but if Nos. 6, 7 and 8 have managed to make an impact on the psyche of their top order, India might still have gained something from the defeat.

Comments
Topics mentioned in this article
Cricket India Cricket Team Yuvraj Singh MS Dhoni Pakistan Cricket Team Sardar Patel Stadium, Motera, Ahmedabad India vs Pakistan 2012
Get the latest updates on IND vs NZ 2021, check out the Schedule and Live Score . Like us on Facebook or follow us on Twitter for more sports updates. You can also download the NDTV Cricket app for Android or iOS.