PCB chief thanks India for warmth and hospitality

Zaka Ashraf says the Pakistan team found an atmosphere of warmth wherever the team went  to play cricket against hosts India. 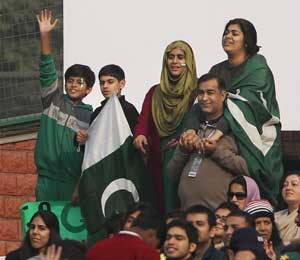 The Pakistan Cricket Board chief Zaka Ashraf on Monday, thanked the BCCI as well as the Indian fans for the warm reception that the team got here during the five-match limited overs series that concluded a day earlier.

"I would like to thank the Indian cricket board as well as all the state associations like DDCA, CAB, GCA, KSCA and TNCA for being great hosts. Wherever we have gone, there has been an atmosphere of brotherhood. The series has been well-contested and we hope to have many more such series," Ashraf told mediapersons before the entire contingent left for Pakistan in the afternoon.

ODI captain Misbah-ul-Haq said, "It was a fantastic series but more than anything, we have had some ever-lasting memories of this tour. In whichever city we went, people treated us as if we were one of their own. It was such a touching experience for all of us. Hopefully, we will have many more such bilateral series which the fans from both countries are eagerly waiting for."