Pakistan players, coach shop in Delhi before flight back home

Several members of the touring side were in an apparel store to check out the collection at a PUMA store in South Extension. 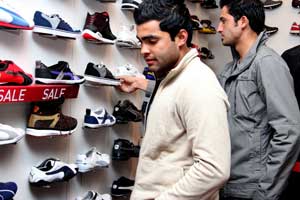 Members of the Pakistan cricket team including coach Dav Whatmore were found shopping at an apparel store in the capital on Monday, before leaving for Lahore.

After completing a successful tour of India - drew T20 series and won ODI series 2-1 - the players chose to unwind before their flight back home. Pacer Junaid Khan was seen browsing through a collection of sweathshirts while wicketkeeper Kamran Akmal, Umar and Saeed Ajmal bought shoes.

Earlier, Pakistan Cricket Board Zaka Ashraf had thanked fans in India for their warmth and hospitality. He had also thanked various state associations and the Board of Control for Cricket in India for the arrangements made for the touring players.

Pakistan will now travel to South Africa for their next series.