The Home Ministry has declared that only those Pakistani fans who have an Indian sponsor can acquire a visa to come and watch their cricket team play in India. 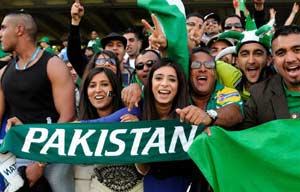 Any Pakistani cricket lover who wants to visit India to watch the upcoming limited over Indo-Pak cricket matches will have to have an Indian sponsor to get a visa as 12 Pakistani spectators had gone missing after the 2007 bilateral series.

The Home Ministry has made it mandatory for each Pakistani cricket fan intending to witness the forthcoming cricket series beginning December 25 to have a local sponsor to get visa.

The decision has come as 12 Pakistani men, who came to India to watch the last India-Pakistan bilateral cricket series held in November-December 2007, did not return home and are yet to be traced.

"There will be no relaxation of visa rules for the cricket fans. We cannot compromise our security as it is our prime concern. So, whoever seeks visa, has to name a local sponsor," a Home Ministry official said.

There will be no cap on the number of visas to be issued for the Pakistani cricket lovers and whoever fulfils the prescribed criteria and becomes eligible to get visa will get it.

The visa applicants will also have to attach a copy of the ticket purchased to watch the series that would comprise three ODIs and two Twenty20 Internationals between December 25, this year and January 6, next year.

The ODI matches will be played in Chennai, Kolkata and New Delhi and the Twenty20 games in Bangalore and Ahmedabad.

All Pakistani cricket fans, who came to watch the 2011 World Cup semi-final in Mohali, had returned home.

Having an Indian sponsor was not mandatory for those who came five years ago.

Pakistani-American terrorist David Headley during his interrogation had said that many Lashker-e-Taiba activists had carried out recce of vital installations in Delhi, including the National Defence College after having secured visas for the Indo-Pak cricket matches in 2007.

Home Ministry officials said any Pakistani cricket lover intending to watch more than one match in India would be wel come to do so provided he or she fulfils the visa obligations. Currently, a Pakistani citizen can get visa for three cities.

However, if the new India-Pakistan visa regime comes into effect before the cricket series begins, visa for five cities can be given.

The Home Ministry will soon discuss with governments of Tamil Nadu, West Bengal, Karnataka, Gujarat and the Delhi Police on various security related issues in the venues and how to ensure fool-proof security during the matches.

A number of high-level Pakistani dignitaries are expected to come to India to watch some matches.