Dhoni said at the customary pre-match press conference that he developed soreness on his back during the morning practice session. 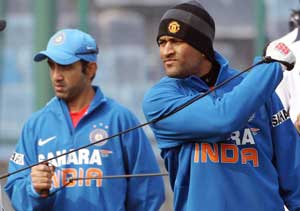 Indian captain Mahendra Singh Dhoni was on Saturday, rendered a doubtful starter for Sunday's third and final One-dayer against Pakistan due to a sore back, forcing the team management to call up Dinesh Karthik as the back up.

Dhoni said at the customary pre-match press conference that he developed soreness on his back during the morning practice session at the Feroze Shah Kotla ground here.

He was actually asked about the absence of middle-order batsman Yuvraj Singh at the training session and the skipper said, "If at all somebody is doubtful, it's me. I have a sore back and we have called Dinesh Karthik as back up.

"Since it was an optional practice session, Yuvraj did not come," he said.

Asked, who will lead the side if he does not recover in time, Dhoni said, "Let's hope that I play. We'll see tomorrow."

The beleaguered Indian batting line-up could come under more pressure if Dhoni sits out. He has been India's top scorer in the series with a 113 not out in the first match in Chennai and an unbeaten 54 in the second in Kolkata.

Asked if it would be a setback for Indian batting, which has been struggling to put up decent scores against Pakistan in the first two matches, Dhoni replied in the negative.

"Nobody is irreplaceable. I am sure if Dinesh plays tomorrow, he will bat as good as I batted in the last two games," he said.