Hundreds of fans greeted the national team and some danced to drums the moment they saw the players walking out of the lounge at the Lahore airport. 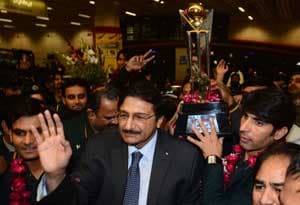 Hundreds of fans greeted the national team and some danced to drums the moment they saw the players walking out of the lounge at the Lahore airport.

Irfan and Khan combined for 11 wickets in the series and destroyed the top order batting lineup in all the three matches. Khan claimed the key wicket of Virat Kohli for 0, 6 and 7 in all the three matches which severely jolted the Indian middle order. Kohli was adjudged ICC's ODI player of the year in 2012 while scoring 1,733 runs in 31 ODI matches including eight centuries.

"The way they (Irfan and Khan) have performed, it shows they have a bright future," Misbah said. "They proved against the world's best batting lineup and simply outclassed them for a huge win."

India averted its first ever whitewash at the hands of Pakistan when it successfully defended a small total of 167 in New Delhi to win by 10 runs.

Misbah said he had aimed for the clean sweep and that was the reason he didn't used the bench strength like fast bowlers Anwar Ali and Wahab Riaz despite taking a decisive 2-0 lead after victories in Chennai and Kolkata.

"We were not relaxed (at New Delhi), we were determined to win the third match and that was the reason we didn't make changes," he said. "But we should give credit to the other team as they fought very well."

Pakistan's new batting sensation, Nasir Jamshed, scored back-to-back centuries at Chennai and Kolkata. Private TV channel Geo reported that the left-hander forgot his man of the series trophy at the team hotel when the team left for the airport on Monday.

Pakistan was also impressive in drawing the Twenty20 series 1-1. After winning by five wickets at Bangalore, Pakistan threatened to chase down a target of 193 at Ahmedabad before falling short by 11 runs.

"We showed how good we are," Hafeez said. "I hope after this performance the ICC and rest of the cricketing world will think about reviving international cricket in Pakistan."

No foreign team has toured Pakistan since gunmen attacked the Sri Lanka team bus at Lahore in 2009 and Pakistan has played its "home" series mainly in the United Arab Emirates.

Pakistan Cricket Board chairman Zaka Ashraf, who also attendedthe ODI series, said he was hopeful of India's return tour to Pakistan this year and denied reports that India has refused to play in Pakistan.

"Cricket diplomacy is going on with India," he said. "The day is not far when India too will come to Pakistan and I am quite hopeful."

Pakistan suffered a huge setback when Bangladesh postponed its tour to Pakistan for the second time in 10 months. Ashraf met with Bangladesh Cricket Board president Nazmul Hasan in New Delhi on Sunday and was still optimistic the tour will take place.

"Bangladesh tour is not off, it's very much on," Ashraf said. "We are in talks with them about the dates of the series."