Due to Miandad's family ties with Dawood Ibrahim, India's most wanted terrorist, there had been reports before a series in 2005 that any requests for a visa by the batting great could be turned down by the Indian government. 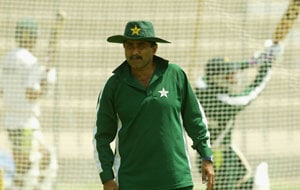 Former Pakistan captain Javed Miandad on Wednesday confirmed that he has been granted an Indian visa that will allow him to attend the final one-dayer of the ongoing limited-over cricket series between the two countries in New Delhi on January 6.

"I am going to New Delhi on January 5 to watch the cricket match between India and Pakistan the following day. I also have a visa for Ajmer Sharif and will go there as well," Miandad said.

Due to Miandad's family ties with Dawood Ibrahim, India's most wanted terrorist, there had been reports before a series in 2005 that any requests for a visa by the batting great could be turned down by the Indian government.

Miandad's son Junaid is married to Mahrukh, the daughter of Dawood, who is wanted in India in connection with the 1993 Mumbai bomb blasts case.

Miandad, however, brushed aside the impression that India was "out of bounds" for him.

"Why should anybody be bothered about me in India with regard to Dawood Ibrahim? His (Ibrahim's) family members are there and they should be quizzed first," he said.

Official sources said that Miandad has been granted visa to visit India for the match.

Meanwhile, the Home Ministry in India said that it has given guidelines to the Indian High Commission in Islamabad on visa issue.

"Individual visas are not being given. The Home Ministry has given guidelines to the Indian High Commission in Islamabad to give visas to the team members, coaches, PCB officials and visitors who have tickets for the matches as well as return tickets," a government official said in Delhi.

"But there is a rider also. As many people may want to travel by buses for which buying advanced rerun tickets are difficult, there is an exemption for bus travellers," he added.

Miandad, who has scored 8832 runs in 124 Tests besides 7381 from 233 ODIs, currently holds the second most powerful position in the PCB - that of director general - and directly reports to the chairman, Zaka Ashraf.

The batting great said the Indian government had also issued him a visa before the 2011 World Cup semi-final between India and Pakistan in Mohali, but could not travel to India at the time due to other engagements in Pakistan.

Meanwhile, no request for visa has been sent for World Cup winning captain Imran Khan.