Indian cricket in 2012: The year in retrospect

It has been a year that Indian cricket fans would largely want to forget. Greats retired and defeats came frequently. There were some amazing performances and comebacks too but overall, 2013 would be seen with eager anticipation. 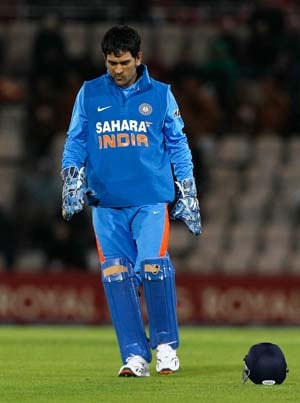 It was a tough year for Indian cricket as it went through a transitory phase with the retirements of Rahul Dravid and V.V.S. Laxman - and Sachin Tendulkar's exit from One-Day Internationals (ODI).

While bilateral cricket ties resumed with Pakistan after a gap of five years, the new year ahead looks tough for skipper Mahendra Singh Dhoni, who is under pressure following the team's poor performance in all versions of the game in 2012.

During the year, India failed to impress in significant Test, ODI or T20I series' and arrest the slide that started last year during the tour of England.

The year started with 0-4 drubbing in Tests in Australia and ended with a 1-2 thrashing by England at home.

India played nine Tests, winnings three, losing five and drawing one. That pretty much sums up the team's performance during the year.

With calls for Dhoni's sacking getting stronger, the stunning rise of Virat Kohli, named vice captain this year, has made him a probable candidate.

It has been a great year for Kohli as the Delhi-lad became the third highest run-getter this year in ODIs, scoring 1026 runs at an average of 73.28 with five tons.

His match-winning and career-best 183 came against Pakistan while chasing a mammoth target of 330 during the Asia Cup in Bangladesh in March. He was also the highest run-getter for India in Tests, scoring 689 in nine matches at an average of 49.21.

It was an emotional press conference by the Bangalorean in his home town on March 9. Dravid was flanked by Board of Control for Cricket in India (BCCI) president N. Srinivasan and his former skipper and teammate Anil Kumble.

In ODIs, India failed to qualify for the finals of the tri-nation Commonwealth Bank Series in Australia and the Asia Cup.

The Asia Cup, however, will be remembered for Tendulkar, who finally got his much awaited 100th century - 114 - against Bangladesh. But for the master blaster it was not a century to celebrate as India lost the match by five wickets.

India's disappointing exit from the Asia Cup was followed by a 4-1 ODI series win in Sri Lanka and a 2-0 Test win against New Zealand at home in August. But five days before the start of the New Zealand Test series Laxman quit Test cricket despite being selected for the series.

Laxman's decision to pave way for youngsters proved right as India, riding on some good performances of the youngsters, whitewashed New Zealand in the two-match Test series.

Young Cheteshwar Pujara, who made a comeback to the Test side after a year, hit a brilliant 159 in the first Test in Hyderabad. India won the match by an innings and 115 runs.

India also won the second Test in Bangalore by five wickets. The Man-of-the-Series was spinner Ravichandran Ashwin, who claimed 18 wickets. Next came the two-match T20 series against the Kiwis in September, which was notable for the return of Yuvraj Singh after a life-threatening battle against cancer. While the first T20 was washed out, New Zealand won the second by a run where Yuvraj made 34.

Yuvraj was also picked up for the ensuing World Twenty20 in Sri Lanka. But it turned out to be a disappointing tournament for India as they failed to make the semifinals despite winning four of their five matches.

Though among the disappoints, there was a silver lining for Indian cricket as the Under-19 team lifted the World Cup in style in Australia in August.

Skipper Unmukt Chand scored 111 not out as India defeated the hosts by six wickets in the final.

As the year came to a close, expectations were high from India to exact revenge on England in the much hyped series. Fans expected India, who lost all matches last year in England, to give them the same treatment.

Though India started the four-match series with a convincing nine-wicket win Ahmedabad, England bounced back strongly to win the next two matches and draw the final Test in Nagpur to win their first series in India after 28 years. The two-match T20 series ended in a draw.

With a week left for 2013, Tendulkar, who was struggled for some time, finally ended his glorious and magnificent ODI career. The decision curiously came moments before the selectors announced the team for the ongoing limited overs series against Pakistan.

Elsewhere, former skipper Mohammed Azharuddin, now a Congress member of parliament from Moradabad, got his life ban, slapped by BCCI, struck down by the Andhra Pradesh High Court.

The board was also lauded for disbursing Rs.70 crore among 160 domestic and international cricketers who had retired before 2003-04.