India vs Pakistan: Magical moments from an unparalleled rivalry

After five years, the teams will resume bilateral ties in Bangalore on Christmas Day.

Team rivalry is one of the splendours of sport, for from it emerges a passion that is transcendental and extends beyond a lifetime. The El Clasico fixture between Real Madrid and FC Barcelona or the Superclasico between Boca Juniors and River Plate in Argentina are among the famous showdowns in football. In the National Hockey League, Toronto Maple Leafs v Montreal Canadiens is a massive draw, as is a game between Boston Celtics and Los Angeles Lakers in the National Basketball Association. The global socio-economic environment has undergone a sea change since these teams met first, but famous moments and the players who designed them remain a talking point, with awe or despair depending on which side of the fence one is on, forever.

In their first match in May 1902, Barcelona beat Real Madrid 3-1 and to this day, Madrid fans have not made peace with the result. The club's official website talks about "the six foreigners they lined up." In cricket, the Ashes between England and Australia is the oldest and fiercest rivalry, while every encounter between India and Pakistan sparks emotions like no other. "The competition is intense when you are playing against Pakistan. You feel like there is lot at stake if you lose. You either deliver or get left behind in such circumstances," says Hrishikesh Kanitkar, who became an instant hero when he hit Saqlain Mushtaq for a boundary to help India win the Independence Cup in Dhaka in January 1998 with one ball to spare.

Sixty years have now passed since that wintry October morning of 1952 when Khan Mohammad bowled the first ball to Vinoo Mankad at the Feroz Shah Kotla in New Delhi in the first Test between India and Pakistan and sowed the seeds of this rivalry. Between periods of no cricket, owing to political turbulence, and a safety-first approach resulting in dull draws in several Tests, the cracking thrillers produced by the nerves can be nerve-jangling even if you are just watching re-runs on television.

Javed Miandad's last-ball six off Chetan Sharma to win the Sharjah final in 1986, and its impact on the Indian psyche, is well chronicled. The bowler had to take help of his childhood coach before resuming normal life. 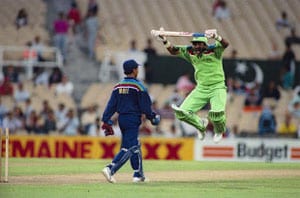 More than a decade latter, India found themselves on the brighter side of two similar scripts. In 1997 in Karachi, Rajesh Chauhan's six off Saqlain helped India win with three balls to spare, but a manic century by Ijaz Ahmed (139 off 84 balls) in the next game meant Pakistan won the series. Debasis Mohanty, the former Indian pace bowler who went for 38 in three overs, recalls that innings. "It was a perfect batting track and Ijaz played superbly."

A few months later arrived the Kanitkar moment. India chased down 314, at that time the highest successful chase in One-Day Internationals. That boundary, for many, was a feeling of scores settled.

Kanitkar vividly remembers that stroke, as well as the moment preceding it. "There was a lot of pressure till I walked in, but as I started walking towards the pitch, the pressure just went away, I don't know how," he says. "It was like I was in a trance. I don't remember thinking between deliveries. It was all automatic."

Only once previously had a target in excess of 300 been chased successfully, but that day, Sachin Tendulkar's 26-ball 41 and the 179-run partnership for the second wicket between Sourav Ganguly, who scored 124, and Robin Singh set up India's date with history. "After Sachin had got out, at the beginning (ninth over), he had said to me to be prepared to bat in a tight situation," says Kanitkar, who batted at No. 7.

Harvinder Singh was India's best bowler in that game, picking up three wickets including that of Saeed Anwar, who top-scored with 140. During the dying moments, he was more tense than the rest, as he was the next man in. "While Hrishi and (Javagal) Srinath were batting, I was sweating and my gloves were wet because of the tension," he recalls. "Thankfully Hrishi hit a boundary, I took a deep breath and ran to the ground to hug him."

Pressure is a common word cricketers use to describe a match between the archrivals. Harvinder, who made his ODI debut against Pakistan in Toronto in September 1997, remembers, "Sachin told me a day before that I would be making my debut. That night, I was scared and could not sleep. The ground was very small, (Shahid) Afridi and Anwar were in good form and I was tense." Afridi became his first wicket and that calmed the nerves. "Their bowling was superior to ours but Abey Kuruvilla helped us with his experience and we started to get wickets. It boosted our confidence."

India won that series 3-1 with Ganguly picking up 15 wickets. Another debutant who created wave in that series was Mohanty, who scalped eight wickets. "The conditions suited me and I just stuck to bowling in the right areas."

A lot of water has flowed under the bridge since then. After five years, the teams will resume bilateral ties in Bangalore on Christmas Day. Harvinder, from Punjab, believes more such series should be encouraged, "If we play more then, business and relationships across the border will improve," he says. "Our culture and language are similar. The new generation should look ahead and leave the past behind."

Comments
Topics mentioned in this article
Cricket Sardar Patel Stadium, Motera, Ahmedabad Pakistan Cricket Team MS Dhoni Yuvraj Singh India Cricket Team India vs Pakistan 2012
Get the latest updates on SA vs IND 2021-22, check out the Schedule and Live Score . Like us on Facebook or follow us on Twitter for more sports updates. You can also download the NDTV Cricket app for Android or iOS.