Pakistan cricket team to arrive in India on December 22

The Pakistan cricket team will arrive in India on December 22 and will play two T20s and three ODIs starting December 25 in Bangalore. 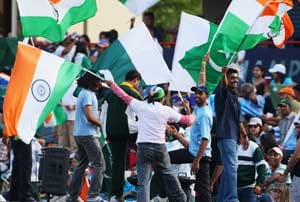 Pakistan will open their first limited-overs series in India for five years with a Twenty20 international in Bangalore on December 25, the Indian cricket board announced on Thursday.

The tourists will play one more T20 match in Ahmedabad on December 27 before a three-match one-day series starts in Chennai on December 30, the Board of Control for Cricket in India secretary Sanjay Jagdale said in a statement.

Kolkata and Delhi will be the venue for the other one-day internationals, the Indian board said after securing government clearance to host Pakistan.

The rivals have not played a series since Pakistan's tour of India in 2007, after cricket ties were broken following the 2008 terror attacks in Mumbai by militants from Pakistan.

The countries -- where cricket is hugely popular -- have fought three wars since independence in 1947.

The Indian and Pakistani cricket teams have met only in international tournaments since 2007.

They clashed in the 50-over World Cup semi-final in the northern Indian town of Mohali last year, a match that was attended by both countries' prime ministers.

India and Pakistan also played during the Asia Cup in Bangladesh in March. Both matches were won by India.