Imran and Gavaskar's scathing criticism of Indian cricketers and IPL

Imran Khan and Sunil Gavaskar, speaking to NDTV, take a strict view of the problems plaguing Indian cricket currently and also extend their seasoned glances on the focus on Indian Premier League. 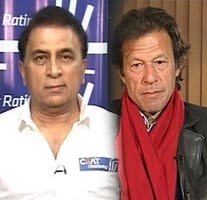 Former cricketing legends Sunil Gavaskar and Imran Khan had scathing opinions on how the Indian team performed against Pakistan, especially in the second ODI played on Thursday which the hosts lost by 85 runs.

On NDTV, while Imran Khan said that India took a big risk by asking Pakistan to bat first and did manage to comeback after staring at a target in excess of 300, Gavaskar was of the opinion that the batsmen should take responsibility for losses. "In India, who are the most famous? It's the batsmen. They are the one's who are known much more than the bowlers because of the performances they've had over the years. I think they are the one's you've got to hold responsible. They have been terribly out of form since the World Cup. It's been a long time since they struck form," he said.

On Thursday at the Eden Gardens, Pakistan had a solid foundation when openers Nasir Jamshed and Mohammad Hafeez were stroking the ball with ease. Ravindra Jadeja and Ishant Sharma however put the brakes on the team and kept the target down to 251. Batsmen however could not build on the effort. Imran said batting second, India had two problems. "When you choose to bat second in an ODI, you have two pressures. One is that of a quality bowling attack and the second is the pressure of the scoreboard. Each time a batsman is trying to get himself in, he has the (asking) run-rate going up," he said.

Gavaskar, in turn questioned the complete focus on IPL, often coming at the cost of the national side. "In the events after the World Cup, you will know the guys who actually took their places for granted, those who didn't make themselves available preferred to play the IPL and then go for surgeries. I think those are the guys who instead of looking at India were looking at contributing for their IPL franchises. If at all you need to take a rest, you need to take a rest from club cricket."

Both cricketers though, lauded the efforts of Pakistan players with Imran Khan going to the extent of saying that he could not wait to see the pace attack perform in South Africa.

Comments
Topics mentioned in this article
India Cricket Team Cricket Yuvraj Singh Mohammad Hafeez MS Dhoni Nasir Jamshed Pakistan Cricket Team Sardar Patel Stadium, Motera, Ahmedabad India vs Pakistan 2012
Get the latest updates on ICC T20 Worldcup 2022 and CWG 2022 check out the Schedule, Live Score and Medals Tally. Like us on Facebook or follow us on Twitter for more sports updates. You can also download the NDTV Cricket app for Android or iOS.