Eden Pitch curator Prabir Mukherjee to be active after retirement

Prabir Mukherjee has said that he will be associated with preparing wickets at Eden Gardens while he is still alive. 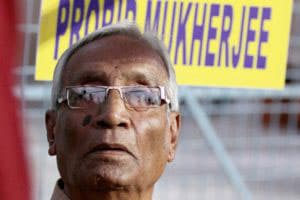 The India-Pakistan one-dayer here on Thursday might be seen as Prabir Mukherjee's last as Eden Gardens curator, but the 83-year-old said he would remain associated with the historical venue as long as he's alive.

"No quitting... I'll be here as long as my health permits, and I'm alive," Mukherjee told PTI.

Mukherjee had drawn a lot of flak after his differences with India skipper Mahendra Singh Dhoni irked Board supremo N Srinivasan who reportedly wanted the veteran curator to remove for not "falling in the line".

But Mukherjee is now a relieved man as there is no diktat for home and away condition during a one-dayer and he's happy to prepare batting-friendly 22-yard.

"In one-day, ICC has clearly laid out rules that wickets should have even bounce with no lateral movement and spin assistance."

"It's a batsmen-oriented game. And we make the pitches in accordance with that," Mukherjee said even as there appeared a tinge of grass on the strip, which is likely to be mowed down before the match begins.

Mukherjee said the team batting first would have an advantage.

"They will get the fresh wicket and will be in a good position to put up a big score," Mukherjee said.

"In these parts, the moment the sun sets dew start settling in. Anti-dew sprays would be used but still there would be a bit of dew."

Down 0-1 in the three match series against arch-rivals Pakistan, India must win the Eden one-dayer to keep their hopes alive.

The third and final one-dayer will be held in New Delhi on January 6.

Comments
Topics mentioned in this article
India Cricket Team Cricket Eden Gardens Yuvraj Singh MS Dhoni Sardar Patel Stadium, Motera, Ahmedabad Pakistan Cricket Team India vs Pakistan 2012
Get the latest updates on ICC T20 Worldcup 2022 and CWG 2022 check out the Schedule, Live Score and Medals Tally. Like us on Facebook or follow us on Twitter for more sports updates. You can also download the NDTV Cricket app for Android or iOS.