Their advise to the Indian government is to ensure that while security is not compromised, that genuine fans get to cheer for their team without any trouble. 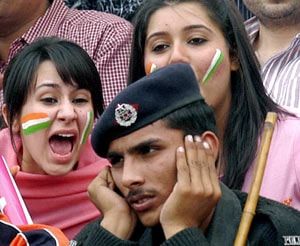 Former Pakistan captains have urged the Indian government to ensure an easy process for issuance of visas to Pakistani cricket fans who wish to travel to India for the forthcoming one-day and T20 series.

Pakistan's most capped player, Inzamam-ul-Haq said the Indian government needed to find a mechanism to ensure they didn't have to compromise on their security but also make the process of getting visas for Pakistani fans easy.

The former players reacted after media reports said that the Indian government was considering making it mandatory for Pakistani fans wishing to travel to India to have an Indian sponsor.

The former President of the International Cricket Council (ICC), Ehsan Mani, however, said that it was the responsibility of the Pakistan Cricket Board (PCB) to resolve the issue.

"I think before agreeing to go and play in India the PCB should have sorted out this matter with the Indians," he said.

Mani said visas for Pakistanis was an important issue and specially while travelling to India.

"I think this should have been in the memorandum of understanding between the two boards," he said.

"The PCB should've taken a surety before accepting India's invitation. Now the fans look set to face difficulties. The PCB was very reactive and agreed all terms and now India is not accommodating Pakistan. The Indian board has its financial interests and will earn millions while our board will get nothing."

The Indian ministry has said that in 2007 when Pakistani fans travelled to India for matches, 12 of them went missing and are still to be traced.

Inzamam said the policy of having a local sponsor would make life difficult for Pakistani cricket fans.

"I think thousands would want to go and watch Pakistan play in India and the Indians need to find some other way to resolve this issue," he said.

Another former captain Moin Khan termed the policy as 'disappointing'.

"The revival of cricket ties is a positive sign but there is a need to relax rules for the fans as well as this series is also being seen as a platform to build better ties and encourage people to people level contacts between the two countries."

Former captain, Rashid Latif said every country understandably needed to pay priority to security issues but the Indians can complete all scrutiny while issuing the visa.

"They can work with the PCB and instead of this condition of having a local Indian sponsor, the fans wishing to get a visa should be made to have a Pakistani sponsor with the PCB involved," he said.