Youngsters carrying Pakistani flags, posters of their favourite players and banners danced and showered rose petals on the players as they came out of the terminal. 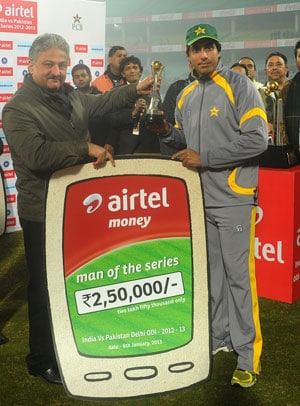 Pakistan star batsman Nasir Jamshed, who tormented the Indian bowlers in the just concluded series, has forgotten to carry his man-of-the-series trophy with him.

Jamshed, who scored back-to-back centuries in the first two one-dayers in the series, and the victorious Pakistan team was accorded a warm welcome on Monday.

"In the rush to get to the airport I forgot my trophy but the team management says I will get it soon," Jamshed said.

"But the welcome we have got today is really out of this world and it shows just how important it was for us to win this series for the people," the left-hander said.

Jamshed said the two centuries he had made in the series had given him lot of confidence and self belief.

"But I will be talking to Inzamam-ul-Haq and Saeed Anwar again to get tips from them on how to further improve my batting," the opener said.

Youngsters carrying Pakistani flags, posters of their favourite players and banners danced and showered rose petals on the players as they came out of the terminal.

Pakistani captains for the T20 and ODI teams, Mohammad Hafeez and Misbah-ul-Haq both dedicated the victories in India to the nation.

"The team won the matches for the entire nation who backed us so whole-heartedly throughout the series," Hafeez said.

The Pakistani T20 captain who featured prominently in the series with his all-round performances said the team had achieved what it had set out to do in India .

Hafeez, who also climbed to number one spot on Monday in the ICC allrounder's rankings, said it was a personal triumph for him.

"We were all eagerly looking forward to playing in India and it was a great experience for all of us." Misbah, who led the side to a 2-1 win in the one-day series, said Junaid Khan, Mohammad Irfan and Jamshed were the outstanding performers of the tour.

"Before the tour we had this belief in our pacers that they would be the key to winning the matches in India and they didn't let us down. Junaid and Irfan bowled superbly throughout the series," Misbah said.

Misbah said the team was very keen to complete a clean sweep in the one-day series.

"Every player tried very hard and we didn't relax or underestimate our opponents at all. But the Indian team played better than us in the match and I think they had a lot more to lose in it so they played better."

Hafeez and Misbah also praised the hospitality extended to the team in India.

"The Indian people turned out to be very sporting. They supported every good performance which was nice to see when playing in front of big crowds. Even otherwise although we didn't get much time to move round but there was lot of respect and affection shown by them," Misbah said.