Yuvraj back, Harbhajan gets a recall for World T20

The Singhs of Indian cricket are back - Yuvraj Singh and Harbhajan Singh - as the Indian selectors announced the squads for the series against New Zealand and ICC World T20 today in Mumbai. 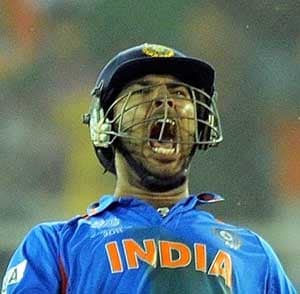 Indian selectors announced squads for the series against New Zealand and the ICC World T20 Championships today and the Singhs of Indian cricket are back. Yuvraj Singh returns to the squad after nine months and a battle with cancer. Harbhajan Singh returns after a whole year; he battled injury and bad form. (Read: Yuvraj Singh Returns)

Yuvraj will be eased back into international cricket in the shortest form the game. He has been picked in the squad for the T20 matches against the Kiwis on September 8 and September 11 and also for the T20 World Cup which begins in Sri Lanka on September 18.

"Yuvraj has been declared fit, so he makes a comeback. And all of us know, if he gets going, he can singlehandedly win matches," chairman of selectors K Srikkanth told reporters after the meeting.

While Yuvraj's inclusion was on the cards, Harbhajan's selection is simply based on the fact that India's spin department is pretty thin on experience. He last played for India against England at Trent Bridge last July-August before he flew back with an injury and has not been considered for selection since then.

Indicating that the Indian cricket is also grooming youngsters for the Tests, Cheteshwar Pujara and Ajinkya Rahane have been given another opportunity to prepare themselves for the international grind.

The surprise inclusion in the T20 squad is Piyush Chawla, who has done precious little in the domestic season gone by but a dearth of quality leg-break bowlers was the reason behind the Uttar Pradesh player getting the nod ahead of the likes of Rahul Sharma and Amit Mishra.

The inclusion of Laxmipathy Balaji is based on his impressive performance for Kolkata Knight Riders in the last two editions of the Indian Premier League. The 30-year-old's ability to bowl effective slower deliveries at the death has led to his selection over Umesh Yadav.

Not much brainstorming was required in the pace department. The only tear-away pacer in the squad is Ashok Dinda while the other two seamers will be the experienced duo of Zaheer Khan and Irfan Pathan. However, India needs to handle Zaheer Khan very carefully.

For the Test series, master blaster Sachin Tendulkar has returned after a break. He had opted out of the recently concluded ODI series against Sri Lanka to spend time with his family.

And contrary to media reports of VVS Laxman getting an axe, the Hyderabadi batsman has retained his spot. There were growing speculations if the wristy batsman will get another chance after his poor form with the bat against Australia earlier this year.

Another player coming back into the side is lanky pacer Ishant Sharma, who had undergone an ankle surgery earlier this year. He had also missed the Indian Premier League 5 due to the surgery.