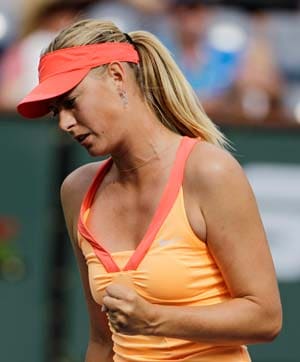 The native of Russia wore a T-shirt noting the anniversary of the explosion to her post-match news conference Monday at the BNP Paribas Open.

"It's crazy and something that you can't even prepare for," Sharapova said about the Japanese crisis. "It happens, and you see the coverage on it and the videos and it's really incredible that something like that can even happen in the world."

A second hydrogen explosion in three days rocked a Japanese nuclear reactor Monday as authorities worked to avert any catastrophic release of radiation in the tsunami zone. The trouble began after last week's quake and tsunami knocked out power, crippling the cooling systems needed to keep nuclear fuel from going into full meltdown even weeks after a reactor shuts down.

International scientists said there are serious dangers but not at the level of the 1986 blast in Chernobyl.

Sharapova's mother, Yelena, was pregnant with her only child when the Chernobyl plant in Ukraine exploded and spewed radioactive clouds over the western Soviet Union and northern Europe.

Sharapova's father, Yuri, and her mother fled the city of Gomel in Belarus - about 80 miles north of Chernobyl - shortly before she was born in Nyagan, Siberia. Gomel was one of the areas most affected by radiation.

Sharapova has worked as a United Nations goodwill ambassador to draw attention to the Chernobyl region.

"Even though something like that happened such a long time ago, it still causes many people on a daily basis, especially kids that were born and now are having kids, you find that they have something in their body that's not allowing them to live a normal life from the pollution," she said.

Seeing the Japanese footage has brought it all back for Sharapova even as she tries to raise her ranking after being sidelined by injuries the last few years.

"It opens your eyes, and obviously puts a lot of perspective in your life," she said about Japan.

"It's a country where I have very great memories from. I started playing there when I was very young, and I always loved my experiences there. So to see it going on there to its culture and the people, it's really sad."

Rafael Nadal, the world's No. 1 men's player, and third-ranked Novak Djokovic of Serbia expressed their support for the country, too.

"I was there last year, and the people were always really nice with me, so I am open to do everything for Japan, and am very sorry and so sad, because what's happening is terrible," Nadal said after his third-round match Monday.

"Hopefully the situation gets better soon. Seems like it's going to be difficult. But if we can help, I don't know which way, but for sure we're going to try something."

Djokovic scribbled "Support to Japan" in black marker on a white wrap that he wore on his left leg during his singles victory on Sunday.

Comments
Topics mentioned in this article
Tennis Maria Sharapova Japan India vs New Zealand 2012
Get the latest updates on ICC T20 Worldcup 2022 and CWG 2022 check out the Schedule, Live Score and Medals Tally. Like us on Facebook or follow us on Twitter for more sports updates. You can also download the NDTV Cricket app for Android or iOS.