Sachin Tendulkar takes guard in a Test match for the first time as a member of parliament when India begin a new home season this week, aiming to rebuild their damaged reputation. 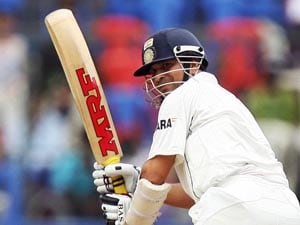 Sachin Tendulkar takes guard in a Test match for the first time as a member of parliament when India begin a new home season this week, aiming to rebuild their damaged reputation.

A two-match series against lowly New Zealand, starting in Hyderabad on Thursday, is an appetiser for the main course -- four Tests each against England and Australia, who both thumped India 4-0 over the past year.

Mahendra Singh Dhoni's men will seek to avenge those drubbings in England and Australia. India were dethroned as the top-ranked Test side and have now slipped to fifth.

"We need to return to winning ways and we have the team to do it," outgoing chairman of selectors Krishnamachari Srikkanth told AFP. "I have great hope for the future."

Tendulkar, 39, the world's leading batsman with an unprecedented 100 international centuries, was in April nominated to the upper house of parliament, the Rajya Sabha, for his contribution to the nation.

The record-breaking batsman, who made his Test debut in 1989, insisted the honour would not distract him from contributing to the team's resurgence.

"It is an honour to be nominated to parliament. I have not fought an election," Tendulkar said in a recent interview. "But I am an active cricketer and I will be focused on the game."

Tendulkar is the last of a core group of Indian batting pillars still playing, following the retirements of Rahul Dravid and VVS Laxman, which have left a gaping hole in the middle order.

Dravid quit in March after a brilliant 16-year career during which he scored 13,288 runs and 36 centuries in 164 Tests.

Laxman, who also played for 16 years, decided to hang up his boots on Saturday, just days before he was due to play the first Test against New Zealand before his home fans in Hyderabad.

With two senior players having gone, media focus is centred around whether Tendulkar will bid farewell before the season ends next March.

Tendulkar has not played five-day cricket since the fourth Test against Australia in Adelaide in January, and even opted out of the recent limited-overs series in Sri Lanka.

The leading run-getter in both Test and one-day cricket would not hazard a guess on how the upcoming home season would pan out for India, saying he preferred taking it one game at a time.

"We can't get that far ahead and start thinking of being number one again," Tendulkar told the ESPN-Star network.

"We are going to be focused only on New Zealand and nothing else. And then England and Australia. We can't jump to the month of March -- that way you lose your focus.

"To be focused on the present is the most important factor, and that is what not only me, but the entire team would want -- to achieve those results which will make us smile."

The home season gives a chance for young talent such as the batting trio of Virat Kohli, Cheteshwar Pujara and Ajinkya Rahane, and bowlers Umesh Yadav and Piyush Chawla, to blossom at the highest level.

Former batsman Sanjay Manjrekar urged the selectors to use the 10 home Tests to build a side that will challenge South Africa in India's away series in November next year.

"It's only on that tour that India can reclaim their lost aura as a Test team," Manjrekar wrote on Cricinfo. "Nothing they do at home before that will help improve their image.

"It is overseas that India lost their self-esteem as a Test team, and it's only there that they will find it back."

Comments
Topics mentioned in this article
Cricket India Cricket Team Virat Kohli Zaheer Khan Ravichandran Ashwin Umesh Yadav New Zealand Cricket Team Sachin Ramesh Tendulkar India vs New Zealand 2012
Get the latest updates on India vs South Africa and check out  Schedule, Results and Live Score. Like us on Facebook or follow us on Twitter for more sports updates. You can also download the NDTV Cricket app for Android or iOS.