Senior Indian batsman Sachin Tendulkar on Wednesday, wished millions of his countrymen on 65th Independence Day celebration and reminisced scoring his first Test century on the same occasion in 1990. 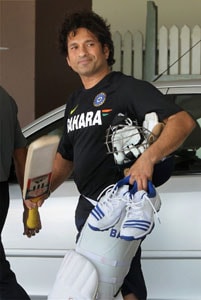 Senior Indian batsman Sachin Tendulkar on Wednesday, wished millions of his countrymen on 65th Independence Day celebration and reminisced scoring his first Test century on the same occasion in 1990.

"Happy Independence Day (to all countrymen). It is 65th anniversary. It is a wonderful occasion and hope we keep progressing," Tendulkar told reporters after a net session at National Cricket Academy (NCA) here.

Tendulkar also recalled his match-saving first Test century (119) against England at Old Traford on August 14 1990. "It is a co-incident. What can I do? Wonderful memories," he quipped.

Tendulkar, sporting a new hairstyle, began preparations for the upcoming New Zealand Test series at a fast-paced practice pitch at NCA, soon after flying in here from Mumbai.

He first asked India pace spearhead Zaheer Khan, who has been training here for the last few days, to bowl at him, which he and other young fast bowlers did. He took a 10 minute break after 45 minute practice and then went back to the nets.

The first Test will begin in Hyderabad on August 23 and the second and final match at Bangalore from August 31.

The two teams will also play two Twenty20 matches after the Test series. The first T20 is slated for Sept 8 in Visakhapatnam, while the second will be played in Chennai on September 11.

Comments
Topics mentioned in this article
Cricket India Cricket Team Sachin Ramesh Tendulkar Virat Kohli Zaheer Khan Ravichandran Ashwin Umesh Yadav New Zealand Cricket Team India vs New Zealand 2012
Get the latest updates on ICC T20 Worldcup 2022 and CWG 2022 check out the Schedule, Live Score and Medals Tally. Like us on Facebook or follow us on Twitter for more sports updates. You can also download the NDTV Cricket app for Android or iOS.