In a match that included an emotional comeback, a bone-crunching collision on the field and some breathtaking attacking batting, it was eventually clever bowling at the death – by James Franklin and Jacob Oram – that separated the two teams, albeit by just one run. 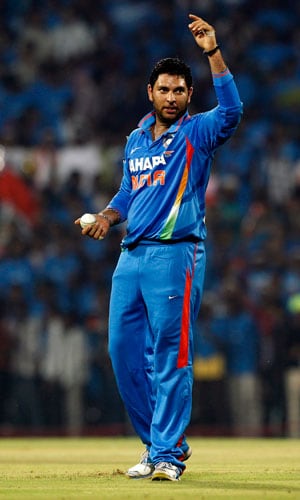 In a match that included an emotional comeback, a bone-crunching collision on the field and some breathtaking attacking batting, it was eventually clever bowling at the death - by James Franklin and Jacob Oram - that separated the two teams, albeit by just one run. New Zealand staged two significant recoveries in the game, first after being reduced to two for two when they were put in to bat, and then in the final overs of India's chase.

Chasing 168, India appeared to be cruising along at 120 for two in the 14th over, before suddenly losing momentum after Virat Kohli's dismissal for 70. Yuvraj Singh, who made 34 off 26 balls, looked good in patches, but understandably struggled for timing towards the latter half of his stay at the crease. Mahendra Singh Dhoni, who came in at No. 5, couldn't adjust to the slowness of the wicket quickly enough, and this was exploited perfectly by Oram and Franklin.

India, who needed 48 from 40 balls when Kohli was dismissed, did not quite contend with how quickly New Zealand tightened the noose by setting attacking fields to batsmen who had just arrived at the crease. India found themselves slipping against the asking rate which went up to more than 10 per over with three overs remaining. Still, you would have backed India to get across the line, given the depth in their batting, but New Zealand held their nerve to clinch a thriller.

Virat Kohli, imperious and unstoppable, treated the crowd to some fascinating strokeplay to set up India's chase. Promoted to open in place of Virender Sehwag, who was ruled out at the last moment due to a flu, hardly put a foot wrong throughout his innings of 70 in just 41.

India lost Gautam Gambhir for three, but Kohli didn't curb his instincts and was quick to pounce on any loose deliveries. Even when faced with good balls, Kohli showed the fine form he was in, being decisive in defence. Suresh Raina, for a majority of the first six overs, was a dormant partner who saw Kohli go into overdrive on a pitch which most batsmen would describe as a beauty, as India brought up their fifty in the seventh over.

Kohli's second T20I fifty came off just 30 balls with nine boundaries. Raina, who tried to come into his own fell for 27 to Kyle Mills, who ended a 60-run second wicket stand. Dejection was replaced by a loud round of applause as Yuvraj walked out at No. 4.

Yuvraj started solidly, but was reprieved on seven when he tried to pull a ball that was well outside the off stump. The ball ballooned into the air just behind square on the leg side and Brendon McCullum, the wicketkeeper, charged for the catch, even as Kyle Mills settled under it. Either there was no call, or it was lost in the din of the Chennai crowd, but the result was McCullum's elbow making strong contact with Mills' face. While McCullum stayed on the field after receiving treatment, Mills limped off with a black eye and a sore head.

Yuvraj made the most of the let-off, sending a Daniel Vettori delivery screaming over the long-on fence to bring up his first six. Kohli lost his wicket trying to clear the ropes at long off in the 14th and India were 120 for three. Following that India lost momentum and nearly got into a desperate situation as Oram and Vettori used the slowness of the pitch to bring the equation down to 21 off nine balls.

Yuvraj broke the shackles with a wristy flick that sailed over the deep midwicket fence. With 13 needed off the last over, Dhoni eased the nerves with a boundary. However, Yuvraj's dismissal with six needed off the last two balls, meant Rohit Sharma, who has been woefully out of form coming into the match, had to pull off a miracle, and this was not forthcoming.

The game was set up by McCullum's belligerent 55-ball 91. Rob Nicol (0) and Martin Guptill (1), New Zealand's openers, fell in the first two overs. It took the calmness of Kane Williamson, who proved to be the ideal foil for McCullum, as they put together a third-wicket stand of 90 runs in 11 overs to restore normalcy. During the course of the partnership, McCullum had a slice of luck going his way while on 38, as he survived an lbw appeal against R Ashwin, when he attempted a reverse sweep and failed to make contact.

After Williamson departed, McCullum added 47 with Ross Taylor before an Irfan Pathan slower ball ended McCullum's innings nine short of a well-derserved century. On the day, though, McCullum won't dwell on the landmark missed, as it gave New Zealand a much-needed victory on an otherwise disappointing tour of India.