Mills' strategy: Beat India to get set for World T20

New Zealand paceman Kyle Mills says his team will try to get into the groove for the upcoming World Twenty20 by getting the better of India in the second Twenty20 match, here on Tuesday. 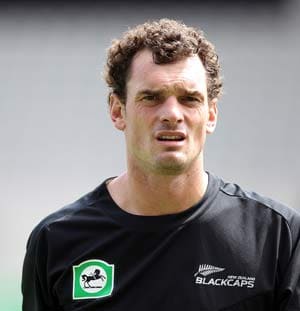 New Zealand paceman Kyle Mills says his team will try to get into the groove for the upcoming World Twenty20 by getting the better of India in the second Twenty20 match, here on Tuesday.

Mills said going into a major tournament such as Twenty20 World Cup, getting the momentum is crucial. "I'm a firm believer in the fact that cricket is a big momentum game. If you have momentum on your side then it instills confidence in your team and you can sort of work with that throughout the tournament. Tomorrow night is a starting point to get into a good place to work towards the World Cup," Mills said on the match eve.

The World Twenty20 will begin in Sri Lanka September 18 and tomorrow' game is the last international assignment for the two teams ahead of the tournament.

"It's unfortunate that the match got washed out a couple of nights ago. It's disappointing ahead of a major tournament. It would've been good to play against a quality team in India. Hopefully, the weather gods hold up and keep the rain away for tomorrow night so we can get some much needed game-time ahead of the big tournament," Mills said.

Mills said losing the Test series was disappointing but they still took a lot of positives from it.

"I think, it as an exciting time for New Zealand cricket. Especially with a young bowling group who have put in some fine performances in the recent past. The first Test was a big switch from the usual New Zealand kind of play and even some of the Indian cricketers will acknowledge that from the bowling group.

"From the batting group, it has been different too. If you look at the ages of the top six, it's very promising. The top six can probably stick around and play for a good five to six years, and that's a positive sign for the Kiwis," he said.

Mills said the game is heavily tilted in favour of the batsmen and the bowlers' job has become more tough, especially in the shorter formats.

"Yeah,Â  there areÂ  always aspects you are trying to improve on. It's a batsmen game, the boundary ropes have been pulled in and the wickets are very flat. As a bowler you are always evolving and trying to stay ahead of the game," he said.

"Wickets in Sri Lanka have changed somewhat. As you have noticed, especially in the new grounds across Sri Lanka such as Pallekele. At night time, there is a lot of movement and fortunately for us, it suits our style of bowling."

"I have not come across a wicket like Pallekele in the sub-continent. Again in Premadasa, during the day it was pretty flat but when the lights came out, it swung around a lot for seamers. People will have to adapt pretty quickly to those situations."

"With Daniel staying out with retirement, it gave the other guys an opportunity and I think those guys stood up and made the most of those opportunities. I think Nathan McCullum really stood up and he has proved himself."

"Now with Dan back in the team, it's a pretty strong spin line up for New Zealand. We all know of Daniel's success in the IPL and he has a fine record. Nathan has been ranked high in the T20s too so it bodes well for us in the spin department," Mills said.