Here are the statistical highlights of the second T20 between India and New Zealand that also marked the return of Yuvraj Singh to international cricket. 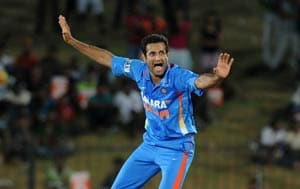 Here are the statistical highlights of the second T20 between India and New Zealand that also marked the return of Yuvraj Singh to international cricket.

# Brendon McCullum became the first batsman to post ten innings of 50-plus in Twenty20 Internationals - a hundred and nine fifties.

# McCullum's brilliant 91 is his second highest score in Twenty20 Internationals - the highest is 116 not out against Australia at Christchurch on February 28, 2010.

# McCullum's above knock is the second highest against India in T20Is, behind the 98 by Chris Gayle at Bridgetown on May 9, 2010. The said innings is the highest in Twenty20 Internationals on Indian soil.

# McCullum's superb strike rate of 165.45 is the highest by a New Zealand batsman against India in T20Is (minimum 50).

# McCullum has received the Player of the series award for the first time.

# India have lost all four matches against New Zealand in T20Is.

# New Zealand is the second team after South Africa to record two victories by one run in T20Is - their first being against Pakistan at Bridgetown on May 8, 2010. In all, seven matches have resulted in one-run victories in Twenty20 Internationals.

# The aforesaid stand is now the highest for the third wicket by any pair against India in T20Is.

# Virat Kohli has posted his highest score in T20Is, outstripping the 68 against Sri Lanka at Pallekele on August 7, 2012.

# Kohli's aforesaid innings is the second highest score by an Indian batsman in a losing cause in T20Is - the highest is 79 not out by Rohit Sharma against Australia at Bridgetown on May 7, 2010.

# Kohli and Raina were involved in a stand of 60 for the second wicket - India's highest against New Zealand in T20Is.