The Rajiv Gandhi International Cricket Stadium at Uppal here is gearing up to host the first Test between India and New Zealand, beginning on Aug 23. 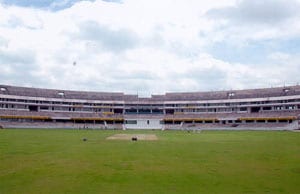 The Rajiv Gandhi International Cricket Stadium at Uppal here is gearing up to host the first Test between India and New Zealand, beginning on Aug 23.

The Hyderabad Cricket Association (HCA) is making all efforts for the smooth conduct of the test, the first to be held under new guidelines of the Board of Control for Cricket in India (BCCI).

As per the new guidelines, any loss of play time during the day would be compensated by playing under floodlights, said HCA secretary M.V. Sridhar.

It would be the second Test to be held at the Uppal stadium. The first Test, that also involved New Zealand, was played here in November 2010 and it ended in a draw.

Sridhar told reporters that the Kiwis would be arriving in Hyderabad in two batches Aug 17 and 18. The Indian team will be landing here Aug 19.

The HCA will sell 34,000 tickets, though the stadium has a capacity of about 40,000. The capacity has been reduced in view of the ongoing canopy works in one section of the stadium.

The tickets would be on sale from Aug 19 at e-seva centres and also on line by kyazoonga.com.

When asked about the possible disruption of the game in view of the protest planned by Telangana Rashtra Samithi (TRS) for separate Telangana state, Sridhar said they appeal to all to help the HCA in successfully hosting the Test. "The police will make contingency plans as when the situation unfolds," he said.

HCA president G. Vinod said the newly-elected body of the HCA was taking all steps to provide better amenities to the spectators.