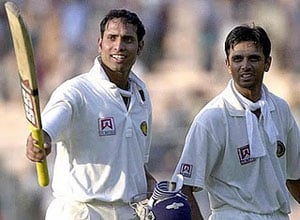 Retirement has been the last thing on Laxman's mind for the past few months. His, and the Indian team's, travails in Australia merely steeled Laxman. Armed with the determination to play his part in helping India rediscover winning ways against Australia early next year and, before that against England - to whom also India lost 0-4 away last year - later this year, Laxman has been hard at work over the last couple of months.

He has spent days together at the National Cricket Academy in Bangalore, working on both his physical fitness and his batting skills that let him down badly in both England and Australia. Last month, he told this correspondent that he was looking forward to the season ahead, as confident of bouncing back from poor outings in England (182 runs in four Tests at 22.75) and Australia (155 in four Tests at 19.37) as he was of India exacting sweet revenge.

All it took was a couple of ill-timed comments by former India internationals immediately after the Indian team for the two-Test series against New Zealand was announced on August 10 for old wounds to reopen, old scars to resurface.

Laxman has forever been the softest target for the experts, the media and the selectors for a vast part of his 16-year international career, who believed that he was the most expendable of India's Fab Four in a middle order which also included Rahul Dravid, Sachin Tendulkar and Sourav Ganguly. Every time his value to the team was questioned, he responded in style. He used snide remarks as the inspiration to uncork one magical, match-winning innings after another, though he did it gently, with a smile, without rancour.

Now, these experts who have shouted loudly from the rooftops that he is denying a youngster his place in the Indian Test squad finally seem to have broken his spirits, destroyed his will to compete, undermined his resolve.

Laxman hasn't been overly sensitive to criticism, but from all accounts, he has been deeply pained by the suggestions that he is holding up a youngster's growth. The seeds of doubt sown in him by the cynics have germinated over the past week. Those who have been a part of his cricketing journey over the last two months have spoken of a distinct change in his attitude from the time these comments have become public.

"I have never seen him this upset," said a long-term Laxman confidant who has been with him through thick and thin. "He was primed for the season ahead. He worked very hard - as hard as I have seen him work at any stage in his career - and showed his hunger by not merely playing league cricket in Hyderabad and in a tournament in Mysore, but also by making centuries in both those games.

"But he hasn't been himself this last week," he added. "His mind has simply not been in it. Having known him for so long and watched him from close quarters for more than 25 years now, I know that he is very deeply hurt at being accused of denying a youngster his place in the sun."

Laxman will make public a decision on his future not too long from now, maybe as early as on Saturday, August 18. He might announce his retirement at the end of the New Zealand Tests, or he might call it quits after the first Test, beginning on August 23 at Hyderabad in what some might feel will be a fitting finale. Or, worse still, he might just walk away into the sunset before the start of the Hyderabad Test, which will be a carping shame because it will deny his home fans, as well as fans of Indian cricket, an opportunity to express their appreciation of and gratitude to one of the finest batsmen cricket has ever seen.

Retirement from international cricket is imminent, but in all probability, Laxman will not be lost to cricket. The desire to steer Hyderabad cricket back to its glory days continues to burn brightly, and it's more than possible that Laxman will channel his energies towards Hyderabad's Ranji Trophy campaign. All that is well and good, but if the 'experts' who have questioned his presence in the Indian team sit back and reflect on the damage they have caused, they should feel a sense of remorse at again having dealt the crisis man of Indian cricket another unkind cut.