Bowled over, paired up and one-day kings

When Sachin Tendulkar was dismissed 'bowled' in all three innings he batted in the recently concluded Test series against New Zealand, many eyebrows were raised, and the general consensus was that age and consequently slower reflexes were the primary cause. 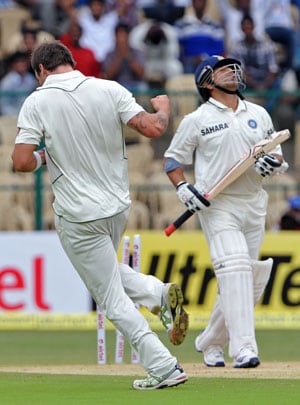 When Sachin Tendulkar was dismissed 'bowled' in all three innings he batted in the recently concluded Test series against New Zealand, many eyebrows were raised, and the general consensus was that age and consequently slower reflexes were the primary cause. However, the current run of dismissals is not the first time Tendulkar has been bowled three times in a row. A similar sequence of dismissals took place in England way back in July-August 2002 in the Lord's and Trent Bridge Test matches. On one of the three occasions, even Michael Vaughan, a part-time bowler, dismissed him 'bowled'. However what followed these three bowled dismissals was a stunning century (193 at Leeds) from Tendulkar.

In the first innings of the second Test against New Zealand that was held in Bangalore, Tendulkar also became the third batsman in Test history to be bowled on 50 or more occasions.Â  Tendulkar (51) is now just behind Rahul Dravid (55), his former teammate, and Allan Border (53), his former Australian opponent . The tables below have details of batsmen who have been bowled most frequently in Test cricket, including the ones who have been only dismissed "bowled"Â  in their entire careers. That rather unique distinction goes to Fred Smith of South Africa and Sam Staples of England.

From the tables below it is interesting to note that Border has been dismissed 'bowled' nearly 24% of the time, while his teammate Shane Warne has the least - 6.59% - among batsmen who have been dismissed in Test matches on at least 150 occasions.

Alongwith only 'bowled' dismissals, we also take a look at which batsmen have been dismissed most frequently either 'bowled' or 'lbw' in their Test careers. Graham Gooch, the former England captain, is followed by Graeme Smith, the present South Africa captain, with Tendulkar next. Kumar Sangakkara has been dismissed in these two fashions less frequently.

The undisputed King of "pairs" is undoubtedly Chris Martin, New Zealand's endearing number 11. In the first Test at Hyderabad, he bagged the seventh pair of his career, which took him even further than the rest in the field. The table below lists Test batsmen with most pairs (i.e. batsmen dismissed for ducks in both innings of a Test match).

For the record, the first batsman to bag a pair was Fred Grace of England, who did so against Australia at The Oval in September 1880. This unfortunately was his only Test appearance, as he passed away two weeks later of pneumonia at the age of 29. Bobby Peel, another Englishman, is the first to bag pairs in successive Test matches. He did so at Adelaide and Sydney in January-February 1895. Peel then got a pair for the third time against Australia at the Oval in August 1896. It took 81 years for this dubious record to be broken when in January 1978 at Melbourne, Bhagwat Chandrasekhar of India became the first batsman in Tests to bag a pair on four separate occasions. Twenty-nine years later in November 2007, Martin made this record his own when he registered his fifth pair against South Africa at Johannesburg. Since then Martin has added two more pairs to his tally. The table below lists Test batsman with four or more pairs to their (dis)credit. The odd man in the list is undoubtedly Marvan Atapattu of Sri lanka, a top order batsman with over 5000 Test runs in 90 Tests with 16 centuries, including six double.

Most pairs in Test cricket

While still on the subject on Martin, the title 'Test cricket's worst batsman' should also be bestowed upon him. His batting average of 2.41 is by far the worst among batsmen who have batted in at least 30 innings. The next lowest is Manjural Islam of Bangladesh, who averages 1.27 runs more than Martin.

The table below has three Indians, with Maninder Singh having the lowest batting average. This may come as a surprise, since Maninder did fairly well with the bat later in his first-class career and finished with an average of 16.91, including an unbeaten 102 at number 8 for Delhi against Haryana at Gurgaon in December 1992. However, there was a stark contrast in Maninder's initial prowess with the bat and his later ability as a batsman. From 1980-81 to 1989-90, Maninder averaged 8.78 with the bat in 107 first-class matches (99 innings), with one fifty. From 1990-91 till the end of his career in 1993-94, he averaged 35.44 in 38 first-class matches (41 innings), with one century and four fifties.

The table below lists the batsmen with worst batting averages in Test cricket history.

Last week's column had a look at Hashim Amla's run-scoring spree in ODIs, when he got to his 3000 career runs in a record quick time - i.e. in the least number of innings. While doing so, Amla also scored his tenth ODI century and broke another record. He is now the quickest batsman to get to ten ODI hundreds (in terms of innings), reaching there in just 57 innings. He took 23 innings fewer than the previous record holder - Virat Kohli, who needed 80 innings. The table below charts the quickest batsmen for ODI hundreds for centuries numbering 5 to 13. The top three batsmen for each career hundred (5 to 13) are listed.