The second Test between India and New Zealand at the M Chinnaswamy Stadium in Bangalore was fascinatingly poised at stumps on the third day, with New Zealand 232 for 9, a lead of 244. Having chased 207 here to win against Australia in 2010, and with the pitch showing little signs of wear, India hold a slender advantage. 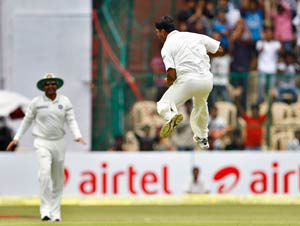 The second Test between India and New Zealand at the M Chinnaswamy Stadium in Bangalore was fascinatingly poised at stumps on the third day, with New Zealand 232 for 9, a lead of 244. Having chased 207 here to win against Australia in 2010, and with the pitch showing little signs of wear, India hold a slender advantage.

The day belonged to two bowlers, Tim Southee and R Ashwin. Southee bowled with great control and guile, returning figures of 7 for 64, the sixth-best bowling figures in New Zealand's history. They were also the best figures by a New Zealander on Indian soil, bettering Dion Nash's 6 for 27 at Mohali in 1999.

Ashwin then kept India in the hunt with his fifth five-wicket haul, to set up a fascinating fourth-innings chase. He had 5 for 69 at stumps.

The morning belonged to New Zealand, while India dominated in the afternoon and both teams kept pace with each other in the final session. An absorbing day's cricket saw 301 runs scored for the loss of 14 wickets.

Virat Kohli, who had been unbeaten on 93 overnight, reached his second Test century early in the morning session with a clip through midwicket for four. It was his first hundred at home, after batting in a fashion that promised many more.

He got a hug from MS Dhoni, the non-striker, and raised his bat to all parts of the ground, acknowledging generous applause from a steadily building crowd. He didn't last long after the landmark, however, falling to Southee after padding up to a ball that was coming in. It was an uncharacteristic misjudgment after what had been a beautifully composed innings.

Kohli's wicket, coming shortly after New Zealand had taken the second new ball, saw India collapse spectacularly. They slid from 301 for 5 to 320 for 9, with Southee taking all four wickets to add to the three he had taken on the second day.

Dhoni was trapped in front after a good innings of 62, while Zaheer Khan and Pragyan Ojha fell without much resistance. However, an enterprising last-wicket stand of 33 between Ashwin and Umesh Yadav ensured that New Zealand's lead was kept to only 12.

Yadav resisted staunchly, with a mixture of luck and common sense, but he was finally bowled by Trent Boult, who did better than his solitary wicket suggested. Ashwin was unbeaten on 32, leaving New Zealand a tricky 20-minute period to negotiate before lunch.

Brendon McCullum and Martin Guptill, the New Zealand openers, were up to the task, and took their team to 29 for no loss from five overs. They had clearly decided to follow the template set by Ross Taylor during his counter-attacking hundred in the first innings, but after lunch, Yadav forced them to rethink their script.

He hit the lengths he found so rarely in the first innings and the rewards were immediate. Guptill inside-edged a full toss and lost his stumps, while McCullum fell to a peach that hit the spot, moved away a touch and caught the edge of the bat on the way to Dhoni.

That left New Zealand 31 for 2, but with the ball becoming older, batting got easier, as it has done throughout this match. Taylor and Kane Williamson batted sensibly, with Taylor becoming the second-quickest New Zealand batsman (after Martin Crowe) to 3000 runs when he had scored 10.

Ashwin had been brought on to bowl late in the first innings, and Dhoni followed that pattern in the second. However, he struck in his first over after coming on, sending back Williamson.

That brought together Taylor and Daniel Flynn, who had shared a 107-run stand in the first innings. Both seemed intent on repeating that, though they didn't down shutters and let scoring opportunities slip by.

Taylor, who had been troubled by Ojha, finally fell to him for the second time in the match, missing a sweep and being struck in front. His wicket meant that New Zealand went in to tea at 123 for 4, with India having a slight edge.

They reinforced that advantage when Flynn fell to a poor shot after tea. He tried to dab Ashwin away with two slips in place, and ended up giving first slip catching practice. It was the fourth time in four innings that he had fallen to the same bowler, though on this occasion it wasn't while sweeping.

At 140 for 5, a collapse would have killed New Zealand's hopes, but Kruger van Wyk displayed the same gumption he had in the first innings, to stitch a 55-run stand with James Franklin. Van Wyk was struck on the helmet and the arm off successive deliveries from Yadav, but continued to bat after receiving treatment.

A late collapse undid some of New Zealand's good work, as they slid from 195 for 5 to 222 for 9, but the contributions of van Wyk, Franklin and Doug Bracewell had ensured that the bowlers would have a decent total to defend.