Two days after his much-awaited comeback match was washed out due to persistent rain, the focus is back on Yuvraj Singh as he looks to resume his innings in international cricket with the second Twenty20 game between India and New Zealand on Tuesday. 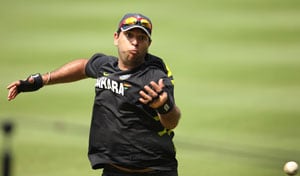 Two days after his much-awaited comeback match was washed out due to persistent rain, the focus is back on Yuvraj Singh as he looks to resume his innings in international cricket with the second Twenty20 game between India and New Zealand on Tuesday.

The first T20 in Visakhapatnam was called off without a ball being bowled, leaving the thousands who had thronged the stadium to watch Yuvraj's much-anticipated return from a successful battle against a rare germ cell cancer, disappointed as rain had the final say.

Yuvraj was diagnosed with the ailment between his lungs within months of winning the Man of the Tournament award in the 2011 World Cup.

His career looked in jeopardy when the diagnosis was first revealed but the flamboyant all-rounder fought back after undergoing three cycles of chemotherapy in USA.

After a satisfactory rehabilitation programme at the NCA, the 30-year-old left-hander will be donning the Team India jersey for the first time post-treatment, and he will surely look to make a statement at the MA Chidambaram stadium.

His last International appearance was the Kolkata Test against the West Indies in November last year, while it was more than a year ago when he last played a T20 (against South Africa on January 9, 2011).

Besides Yuvraj, the match will also mark Harbhajan Singh's return to the squad after a long layoff. The off-spinner had gone out of favour after being blanked 0-4 in the disastrous England tour in July-August last year.

However, with his immediate challenger Ravichandran Ashwin in great form, having taken wickets by the bagful in recent times, chances of Harbhajan being included in the playing XI does not look too bright.

It will be interesting to see if the think-tank goes for an all-offspin attack.

The brief two-match series assumes significance as it is being looked upon as the start of India's countdown for the World Twenty20 that will get underway in Sri Lanka on September 18.

And with the first match being washed out, the Men in Blue will look to utilise Tuesday's encounter to the fullest, though inclement weather can play spoilsport again.

The visitors may hold an edge statistically having won all their three T20 ties against India, but the hosts will still start as favourites after their 2-0 sweep in the Test series.

While Yuvraj and Harbhajan's presence have added to their strengths, India's mainstay in batting in recent months has undoubtedly been Virat Kohli.

The youngster from Delhi has been going through a purple patch of sorts, having scored runs in every format of the game and against almost every opposition.

The hosts also have, in the ranks, Suresh Raina, who have always excelled in this format. Having played here in four out of the last five editions of the Indian Premier League, the Chennai Super Kings knows the conditions like back of his hand.

Add to it the explosive opening pair of Virender Sehwag and Gautam Gambhir, and the batting line-up looks formidable. Sehwag has not been in the best of form of late, but one can never take him lightly.

Last but not the least is the calm influence of skipper Mahendra Singh Dhoni, one of the hardest hitters in world cricket.

In the middle-order Rohit Sharma will have to prove his worth soon enough or the struggling batsman might end up losing his spot to the talented Manoj Tiwary, who has been waiting in the wings.

As far as bowling is concerned, Ashwin will be the man to look out for as he flummoxed the Kiwis by picking up 18 wickets in the Test series. The local boy would be keen to continue the dream run in front of his home crowd.

The resurgence of seamer Irfan Pathan in the last ODI series in Sri Lanka is another positive for India.

Also returning to side, after being on the sidelines for more than three and a half years, will be pacer Laxmipathy Balaji.

The unassuming bowler paved the way for his comeback with a tidy performance for IPL champions Kolkata Knight Riders, and he will certainly look to make an impression if he gets a look-in alongside spearhead Zaheer Khan.

On the other hand, New Zealand have been struggling for a while now, having lost three consecutive Test series (against South Africa, West Indies and India).

The Black Caps will look to experienced campaigners such as Jacob Oram, Daniel Vettori and Kyle Mills - the three have joined the side for the T20s - for a turnaround in their fortunes ahead of the World T20.

Captain Ross Taylor, who struck a counter-attacking century in the Test series, and big-hitting opener Brendon McCullum will have to shoulder the batting responsibility.

The ones mentioned above have the experience of playing in these conditions thanks to their IPL stints.