Bad weather wreaked havoc in the first Twenty20 international between India and New Zealand in Visakhapatnam on Saturday. The match was called off after heavy rains persisted in. 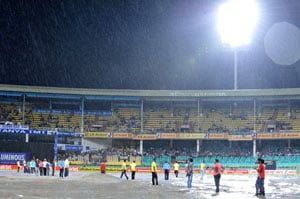 Bad weather wreaked havoc in the first Twenty20 international between India and New Zealand in Visakhapatnam on Saturday. The match was called off after heavy rains persisted in.

The covers were all that hogged the limelight in the stadium, with heavy rain lashing the southern coastal town since late afternoon.

The two-match series, a build-up for the World Twenty20 in Sri Lanka later this month, marks Indian batsman Yuvraj Singh's return to big-time cricket after being treated for germ-cell cancer between his lungs in March-April. He will now have to wait another couple of days before taking to the field in Indian colours.

A giant banner welcoming Yuvraj Singh back to international cricket after 10 months, reading 'Goodbye Cancer, Welcome Back Sixer' summed up the mood at the venue of the first T20 International between India and New Zealand even as heavy rains lashed the Dr YSR Reddy ACA-VDCA Stadium.

Amid the depressing weather, it was Yuvraj, sporting a bright smile and a badge that read 'YouWeCan', who stole the limelight of the full-house turnout at the 27,000 capacity stadium.

Heavy rains lashed the stadium more than an hour before the start of the match but the crowd -- and the cricket fans all over the world -- waited patiently to see Yuvraj back again, after conquering a rare germ cell cancer.

Even amid the bad weather, the official broadcaster kept showing highlights of the India-England 2007 Twenty20 World Cup, when Yuvraj had hit six sixes in a Stuart Broad over.

"It's a great feeling to be back. The preparation has been very well. I have pushed myself, every hour, every day. The rain is unfortunate. But I just can't wait to be back on the field," the 30-year-old, who last played for India in November 2011, said.

There was not just one banner, many of them welcoming Yuvraj were seen all over the gallery in the rain-soaked atmosphere.

'Yuvi, we want again 6x6 six sixers', 'The King of Sixer is Back', 'Yuvi Is Back', 'God please stop the rain, we want to see Yuvi back again', read some of the banners.

Not only from areas surrounding Visakhapatnam but people from far away had come to see Yuvraj's comeback match.

"We have scheduled our holidays so that we would get to see our hero back on the field on our home ground," 26-year-old engineer A Siddharth, who hails from Visakhapatnam, told PTI, sporting an India jersey.

He, along with his colleague I Varma, was in a long queue to enter the stadium.

"We are Yuvraj fans. It was a sad day for us when we got to know about his disease. But we knew he would fight it out. We kept sending him 'get well soon' messages on Twitter. And yes, he is back today. Hope to see our old Yuvraj back again. The king of sixer is truly back." he added.

Yuvraj conceded that he was little short on match practice but said, "...but I'm confident of doing well again. The atmosphere in the dressing room has been awesome. Everybody is hugging me."

After being diagnosed with cancer, India's 2011 World Cup hero took three cycles of painful chemotherapy in a United States hospital and returned to the country in April after a successful treatment.

"It was really frustrating. I could not take it initially. It was a very tough time for me and my family. At times, I lost my confidence. But the passion was to play for India, something that kept me going," he said.

Sporting a 'YouWeCan' badge, Yuvraj said he would like to create awareness and remove the stigma attached around the disease.

"The basic aim is to create awareness and remove the stigma. We want to give a message, 'if we can then you also can'."

'YouWeCan' is set up by the Yuvraj Singh Foundation, similar to that of Lance Armstrong's 'Livestrong' band that had become a rage in the 2000s.

"I'm passionate about it... It's there to spread awareness about cancer and I hope to raise big funds like Livestrong Foundation does," Yuvraj said referring to his 'hero' Lance Armstrong.

The second match is due to be played in Chennai on Tuesday.

(With PTI and AFP inputs)