India vs New Zealand: India-born New Zealand spinner Ajaz Patel said he and colleagues were guilty of not maintaining their line and length in the opening Test and would need to be tighter in their execution in the second game beginning Friday. 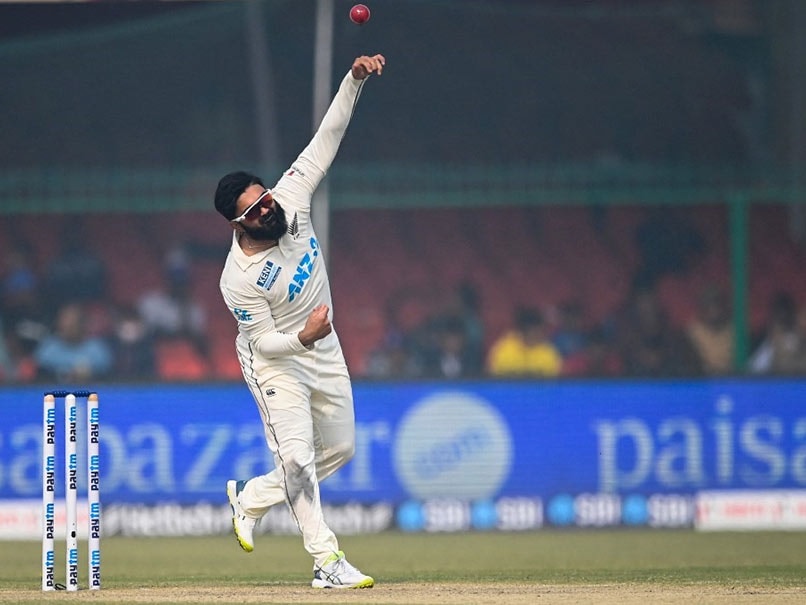 IND vs NZ: Ajaz Patel feels New Zealand were guilty of not maintaining their line and length in Kanpur.© AFP

India-born New Zealand spinner Ajaz Patel on Wednesday said he and colleagues were guilty of not maintaining their line and length in the opening Test and would need to be tighter in their execution in the second game beginning Friday. "I think as a spin bowling unit we were somewhat guilty of possibly not keeping the stumps in play for long periods of time. At the same time, these guys are good players of spin. They didn't give us too much," said Patel during a virtual press conference. While Patel snapped three wickets, Rachin Ravindra and William Somerville went wicketless.

In comparison, Indian spin trio of Axar patel, Ravichandran Ashwin and Ravindra Jadeja shared 17 wickets among them in the first Test.

"We just gotta make sure that we are tighter in our lines and lengths. I am sure the boys have picked up and adapted to the next game but again the new surface will be different," Patel said.

"From batting perspective, our batters did an outstanding job on that wicket against the calibre of spinners that they have, it is just about adapting and learning and playing conditions that is front of us," he added.

Patel said his team is capable of causing upsets and will go into the second Test looking for a win.

"It is about playing best cricket possible and everyone contributing like last game. That's how we look to play, it takes a team effort. We are playing good cricket at the moment and we are going to tap into that and be comfortable," he said.

Patel said they have "firm faith and belief that we can perform in all conditions."

"We know they are good bowlers of spin but at the same time we have the trust and belief that we have good players of spin," he said.

"We saw in the last game, the way Tom Latham played and Will Young played. We know we do have the capability from a batting perspective to score runs against the Indian team and adept enough defensively to keep them at bay," he added.

The opening Test had ended in a draw after Patel and his Indian-origin colleague Rachin Ravindra held a 91-ball vigil to save the match for the visitors, who were nine down in pursuit of 284 on the final day.

Patel, who was born in Mumbai, said it was quite an irony but at the same time an amazing story for the two of them to fight for a draw against the country of their birth.

"It was also a very cool moment for us. I guess the irony of it was that two boys of Indian heritage, who have been brought up in New Zealand, were out here playing cricket against one of the biggest cricketing nations and fighting for a draw," he said.

"That's I suppose is a quite amazing story in itself, for us it was quite special to be out there and I think it was quite fitting," he added.

The 33-year-old Patel said it is an emotional moment for him to return to play cricket in the city of his birth.

"It is emotional. I was thinking about it, how many times I had left that airport but this time I am representing NZ. When I got off at airport, I had a lot flashbacks of leaving Mumbai for the first time and coming back for first time. It will be a special moment for me, something I will look back fondly in future," he concluded.

New Zealand Cricket Team India vs New Zealand 2021 Cricket
Get the latest updates on SA vs IND 2021-22, check out the Schedule and Live Score . Like us on Facebook or follow us on Twitter for more sports updates. You can also download the NDTV Cricket app for Android or iOS.