Virat Kohli Asks Indore Crowd To Cheer For Mohammed Shami And Not Him. Watch Video

Mohammed Shami was in fiery form, claiming three wickets, as he and the other Indian bowlers restricted Bangladesh to 150 all out in the first inning. 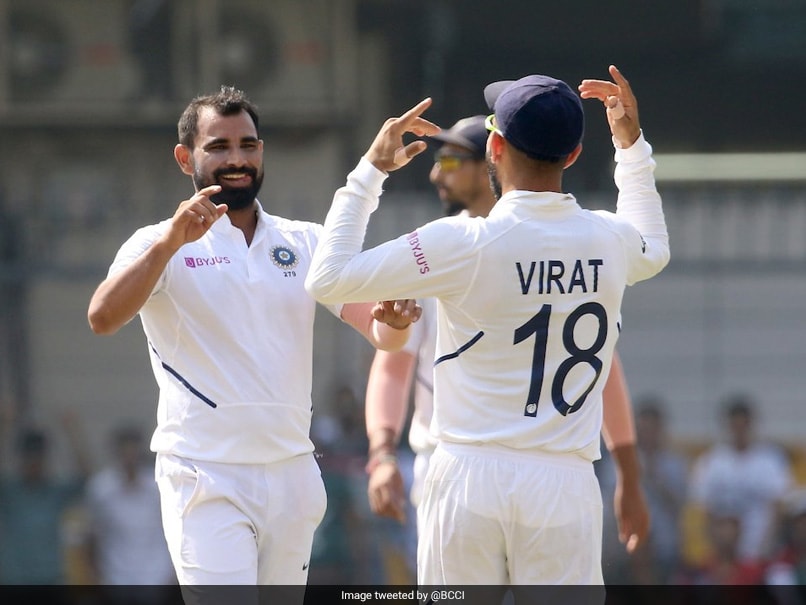 Virat Kohli won hearts of many after videos of him asking the Indore crowd to clap for Mohammed Shami instead of him started doing the rounds on Internet. The incident happened on the first day of the first Test between India and Bangladesh at the Holkar Cricket Stadium on Thursday. The crowd support, encouraged by skipper Virat Kohli, worked magic for Mohammed Shami as he struck on the very next ball, castling Mushfiqur Rahim down for 43 on the fifth ball of the 54th over. Mohammed Shami trapped Mehidy Hasan LBW for a golden duck in the next delivery to help India reduce Bangladesh to 140/7 at tea.

All heart - Captain @imVkohli asks the crowd to cheer for an on fire @MdShami11 #TeamIndia #INDvBAN pic.twitter.com/IEk2GY537Y

Shami, who claimed a hat-trick in the 2019 World Cup, got himself to the brink of a maiden Test hat-trick but failed to strike a triple. Taijul Islam, facing his first delivery, defended successfully.

Shami finished 3/27, while Ishant Sharma, Umesh Yadav and spinner Ravichandran Ashwin chipped in with two wickets each, as India bowled out Bangladesh for a paltry 150 in 58.3 overs.

Bangladesh had won the toss and opted to bat in the opening match of the two-Test series in Indore.

Rahim remained the top-scorer for Bangladesh with 43 runs off 105 balls, including four boundaries and a six, while five of their batsmen were dismissed for a single-digit score.

However, fast bowler Abu Jayed gave Bangladesh an early breakthrough as dismissed Rohit Sharma for six in the eighth over.

In a recent three-match Test series against South Africa, Rohit batted as Test opener for the first time in his career. He had top-scored in the series with 529 runs in four innings, with a maiden double hundred in the longest format.

Virat Kohli India vs Bangladesh India vs Bangladesh, 1st Test
Get the latest updates on ICC Women's Cricket World Cup 2022 and IPL 2022, check out the Schedule , Live Score and IPL Points Table. Like us on Facebook or follow us on Twitter for more sports updates. You can also download the NDTV Cricket app for Android or iOS.