Rohit Sharma and Yuzvendra Chahal played crucial roles as India won the second T20I at Rajkot to level the series at 1-1. 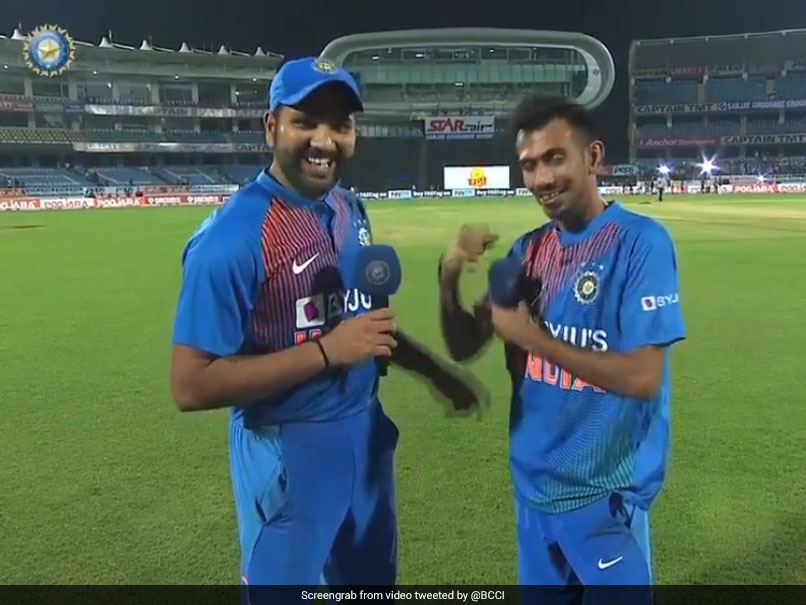 Rohit Sharma made a special appearance on "Chahal TV".© Twitter

Rohit Sharma, who powered India to victory in the second T20I against Bangladesh in Rajkot with a stunning 43-ball 85, came up with some hilarious replies to Yuzvendra Chahal in an interview shared by BCCI. After leading his team to a win on his 100th T20I, Rohit, who was appearing on the legspinner's "Chahal TV", was asked about how he got the power to hit sixes like he does, when he told sarcastically told Chahal that he too had the muscles to hit the big shots.

Then, as Chahal gives Rohit a send-off at the end of the video, wishing him a 100 more T20I appearances, Rohit says "My 100s will keep coming but when will you take a 5-wicket haul?" Chahal immediately replies saying he is making all efforts, before the two break off into laughter.

MUST WATCH: Chahal TV with the Hitman!

From @ImRo45's 100th T20I to his 'secret' recipe to those monster sixes, this fun segment of Chahal TV has all the answers! @yuzi_chahal - by @28anand

In the tenth over of India's innings, Rohit Sharma took the attack to Bangladesh offspinner Mosaddek Hussain, hitting him for sixes off his first three deliveries. "First three balls, three sixes. What was going on in your head then? Were you thinking of going for six sixes?" Chahal asks Rohit in the interview.

"I was trying to go for the six sixes. But when I missed the fourth ball, I thought I'd take singles off the last two," Rohit replies.

"It was quite humid out there. How do you get this much power? Hitting sixes, continuously running between the wickets..." Chahal asks. "You don't need muscles to hit sixes," Rohit starts off when Chahal interrupts him saying "So I can hit them too?"

"Yeah of course you can, but you have good muscles," Rohit says before asking him to flaunt them. The spinner obliges, flexing his right arm to show off his biceps.

At the end of the interview, Chahal teases that "The next time 'Rohita' Sharma comes on 'Chahal TV', I hope he comes after scoring a century and that he plays a 100 more matches," to which Rohit sharply responds "My hundreds will keep coming, but when will you take a 5-wicket haul?"

India comfortably beat Bangladesh by eight wickets in the second T20I to level the series at 1-1. The series decider will be played on Sunday in Nagpur.