India vs Bangladesh: Deepak Chahar said skipper Rohit Sharma showed great confidence in him and told him that he will bowl him in the crucial overs. 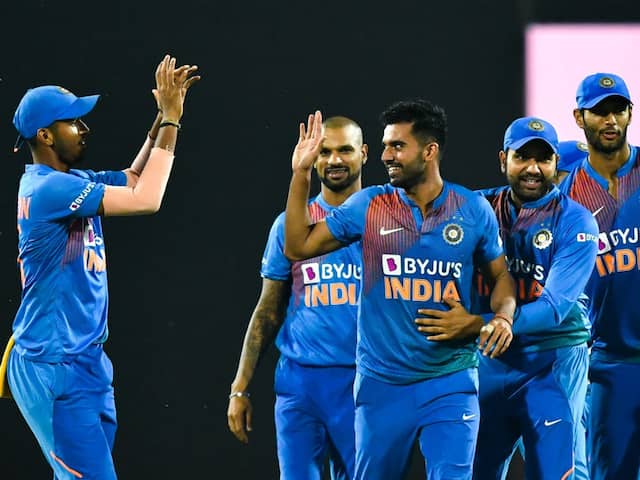 It almost looked like Bangladesh would run away with the third T20I in Nagpur on Sunday and with it register their maiden series win over India as Mohammad Naim and Mohammad Mithun looked to be in cruise mode. With dew not helping matters, skipper Rohit Sharma handed the ball to pacer Deepak Chahar, hoping for the youngster to rise to the occasion. And that is exactly what he did.

Chahar, who had earlier scalped for Liton Das and Soumya Sarkar, delivered instantly in the 13th over and started the collapse. The rest as they say is history. Chahar finished with figures of 6/7 -- the best in T20Is - and also became the second Indian to pick a hat-trick in the format.

Speaking to IANS, Chahar said that while everyone is talking about him picking the hat-trick and winning India the game in conditions not suited for bowlers, it is the faith that skipper Rohit showed in him that makes him happy.

"He told me I will use you as a Bumrah today. I will bowl you in the crucial overs and that was motivating for me. I love it when I am given responsibility under pressure because that makes me feel that I am being trusted. I feel bad when nobody trusts me. To get that confidence from the captain felt good at that stage of the game," he smiled.

"Imandar hona chahiye (You should be honest)...I know where he stands and I also know where I stand. He is the No.1 bowler in the format and as a T20 bowler, he has everything, be it pace or control. He is the No.1 bowler for me and saying that is not a shame. I am not competing with him and my job is to do well. You need to focus on the game and the team should win and that has to be the priority.

"When they were cruising at the end of 12 overs, I wanted to walk up to him and ask for the ball from the captain, but I didn't because I knew the captain would have his plan and give me the ball. The whole thought was that we shouldn't lose the game and the series. What matters when you play for the country is to perform and win matches," he explained.

More than the wickets he picked, it was the confidence he showed despite the dew that had people sit up and take note and the pacer says that playing in Chennai has helped him learn the art.

"Playing in Chennai has helped a lot. In Chennai there is a lot of dew and sweat and I have made mistakes and bowled no-balls in those situations, but I learnt from that. I have learnt from that experience on what to bowl in these situations and how to go about the job," he said.

Talking of Chennai and IPL is incomplete without bringing in M.S. Dhoni and Chahar said that the former India skipper doesn't believe in sharing too many inputs and backs you to do the job.

"I keep speaking to Dhoni, but Mahi bhai doesn't give you too many inputs. He explains things to you in match situations when he feels you need help. He always says that you are a professional and you should know what your strengths and weaknesses are and how you should deal with a certain situation. He gives you that confidence that you are good to perform at the top level," he smiled.

Pundits have often spoken about how he is more of a new-ball bowler, but Chahar silenced all with his performance on Sunday. And the CSK pacer says that it was more about people assuming things because he always had variations up his sleeves.

"People assumed that and didn't give me a chance to bowl at the death. Whenever I got a chance, I bowled well. I have bowled before as well, even for my state. Generally you don't bowl those bowlers at the death who bowl at less than 130kph, but I don't have that issue. I have bowled around 135kph even in the IPL and say in CSK I wasn't used because Mahi bhai had other bowlers.

"It depends also on the captain. Team requirement is also something that you need to look into. Like on Sunday we had only two fast bowlers in Khaleel Ahmed and me. Shivam Dube isn't a proper fast bowler. So, Rohit bhaiya used me in the death. When I played before, the set-up needed me to bowl at the top," he pointed.

Every player is preparing keeping the World T20 in mind and while Chahar too wants to go ahead and represent the country in the showpiece event in Australia in 2020, he wants to keep working on his game and get better with each passing day.

"World T20 is about 11 months away and that is a long time. Obviously I have that in the mind and we are looking to win the trophy, but as a sportsman you can't think so far as there is a lot of international cricket before that as well as the IPL. I want to gain more trust from the management till then and there will be times where I will get hit and I want to still gain the trust of the team so that they support me. Performing in every match is the goal.

"I take every game as the last as the competition is very high and the fast bowling unit is doing really well. Cementing your place in this team is very tough, so I look to perform every time I get an opportunity," he signed off.

Jasprit Bumrah India vs Bangladesh Cricket
Get the latest Cricket news, check out the India cricket schedule, Cricket live score . Like us on Facebook or follow us on Twitter for more sports updates. You can also download the NDTV Cricket app for Android or iOS.