Rishabh Pant failed with the bat, scoring just six runs in the third T20I against Bangladesh in Nagpur. 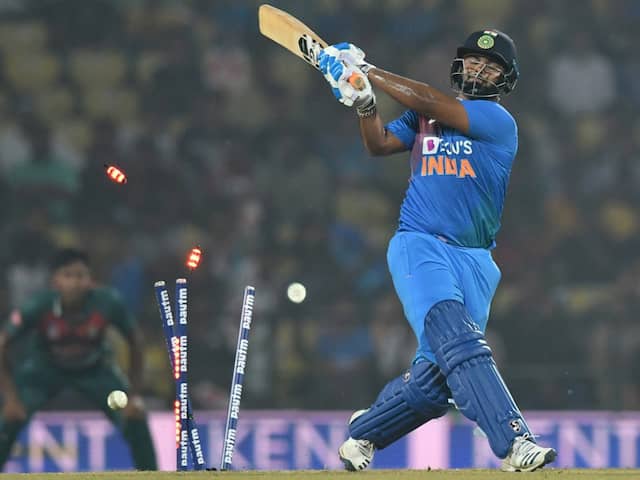 Rishabh Pant became a target of social media trolls once again after he disappointed with the bat in the third Twenty20 International (T20I) against Bangladesh at Vidarbha Cricket Association Stadium in Nagpur on Sunday. Shreyas Iyer and KL Rahul had built a solid foundation for India with their 59-run stand for the third wicket but left-handed Rishabh Pant couldn't capitalise on it. The young wicketkeeper-batsman once again failed to fulfill his finisher's role and departed cheaply after facing nine deliveries, in which he managed only six runs. Despite Rishabh Pant's failure, India posted a competitive total of 174/5 in their allotted 20 overs, thanks to Manish Pandey's cameo of 22 off 13 balls. In reply, Bangladesh were bowled out for 144, with Deepak Chahar taking a hat-trick to guide India to a 2-1 series win. Manish Pandey's innings helped India get to a challenging total but it couldn't help Rishabh Pant from getting brutally trolled on social media.

Disappointed with Pant's consistent failures, the fans on Twitter flooded the micro-blogging site with all sorts of memes.

Other players should learn something from Shreyas Iyer. When you get an opportunity, you got to utilize it. Rishabh Pant had enough chances but still failed. Still the team management keep experimenting with Pant. Now Sanju Samson has to wait until the next t-20 series.#INDvBAN

India got off a poor start as last match's hero skipper Rohit Sharma departed cheaply after scoring two runs in the second over itself.

Rohit's batting partner Shikhar Dhawan continued for a little while but couldn't leave a lasting impact on the game and fell for 19 runs.

KL Rahul and Shreyas Iyer, India's top-performers with the bat, brought the hosts back in the game with a crucial third-wicket stand which helped India give Bangladesh a 175-run target.

Rishabh Pant India vs Bangladesh Cricket India vs Bangladesh, 3rd T20I
Get the latest Cricket news, check out the India cricket schedule, Cricket live score . Like us on Facebook or follow us on Twitter for more sports updates. You can also download the NDTV Cricket app for Android or iOS.