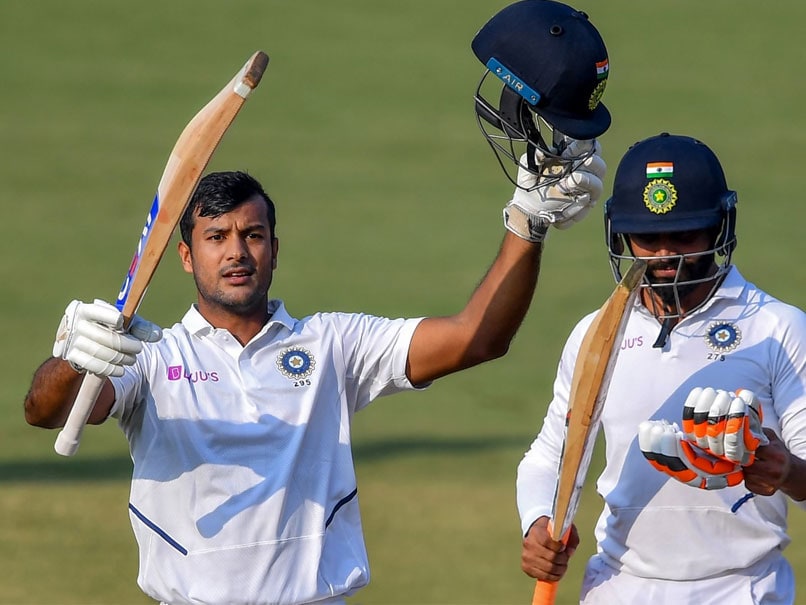 Mayank Agarwal scored a double century as he smashed Bangladesh bowlers all over the park.© AFP

Mayank Agarwal stole the show in Indore on the second day of the opening Testas India dominated the proceedings against Bangladesh on Friday. Mayank Agarwal brought up his second double century in the longest format of the game to help India finish Day 2 at 493 for six, leading the visitors by 343 runs. In the last session, Ravindra Jadeja raced his way towards a fine half-century and remained unbeaten on 60 at stumps. Jadeja put on 39 runs for the seventh wicket with Umesh Yadav, who smashed three sixes and a four.

Cheteshwar Pujara and Mayank Agarwal resumed India's innings from 86 for one. Pujara hit Abu Jayed for consecutive boundaries  in the second over of the day to reach his 23rd half-century in Tests.

Jayed came back in his next over and removed Pujara for 54. The 26-year-old fast bowler continued his good work and sent back India captain Virat Kohli for a second-ball duck.

Jayed trapped Kohli right in front of the stumps but the on-field umpire gave the decision in favour of the India skipper. Bangladesh went for a review and got the reward.

Ajinkya Rahane, India vice-captain, then joined Mayank Agarwal in the middle and stitched together a 190-run stand for the fourth wicket.

Rahane missed his century by 14 runs as he was caught in the deep by Taijul Islam off Abu Jayed's short delivery.

It was Mehidy Hasan who managed to pick up the crucial wicket of Mayank Agarwal. The opening batsman was looking to go for a maximum and was caught at square-leg for 243.

Late in the day, Umesh Yadav and Ravindra Jadejastruck boundaries for fun as India managed to score in excess of 400 on the second day of the Test match.

For Bangladesh, Abu Jayed was the pick of the bowlers. He finished the day with figures of 4/108.