India demolished Bangladesh in the opening Test of the two-match series to register their sixth straight win in Test cricket. 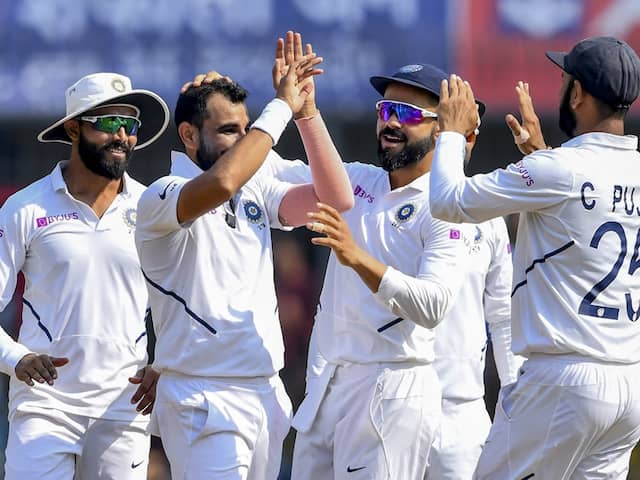 India defeated Bangladesh by an innings and 130 runs in the first Test in Indore on Saturday. India wrapped up the series opener inside three days as Bangladesh were bowled out for 213 runs in their second innings. India captain, Virat Kohli declared India's first innings at 493 for six, their overnight score from Day 2. On Day 3, India's fast bowlers found the right line and length from the word go and that proved to be too much for Bangladesh's batting line up. This was India's sixth consecutive win in Test cricket, which is the joint most for the country. India had previously won six straight Tests under MS Dhoni in 2013.

Umesh Yadav picked up the first wicket when he made a mess of Imrul Kayes' stumps. Ishant Sharma then followed it up by cleaning up Shadman Islam.

Mohammed Shami, who came in as first change, bowled a fiery spell and picked up two wickets before Lunch to leave Bangladesh reeling. The visitors were 60 for four after the first session on the third day, trailing India by 283 runs.

Shami continued the good work after Lunch as he sent back Mahmudullah for 15. Bangladesh had lost half of their side for 72.

Mushfiqur Rahim and Liton Das then stitched together a 63-run stand for the sixth wicket. But Ravichandran Ashwin outfoxed Das for 35, who charged down the track and lofted a straight delivery into the hands of Ashwin.

Bangladesh fought back in the post Lunch session, losing just a couple of wickets and scoring over 130 runs.

Ashwin wrapped up the innings as he finished with figures of three for 42 in the second innings.

Earlier, India had bowled out Bangladesh for just 150 runs in the first innings. Mohammed Shami was the wrecker-in-chief who finished with figures of three for 27 while Ishant Sharma, Umesh Yadav and Ravichandran Ashwin picked up two wickets each.

With the bat, Mayank Agarwal was the star for the home side as he brought up his second double hundred in the longest format of the game.

With the win, India go 1-0 up in the two-match Test series. The second Test will be played at Eden Gardens in Kolkata which will be a day-night encounter.