Shikhar Dhawan hurt his left shoulder as he dived to save an Aaron Finch shot in the cover region. 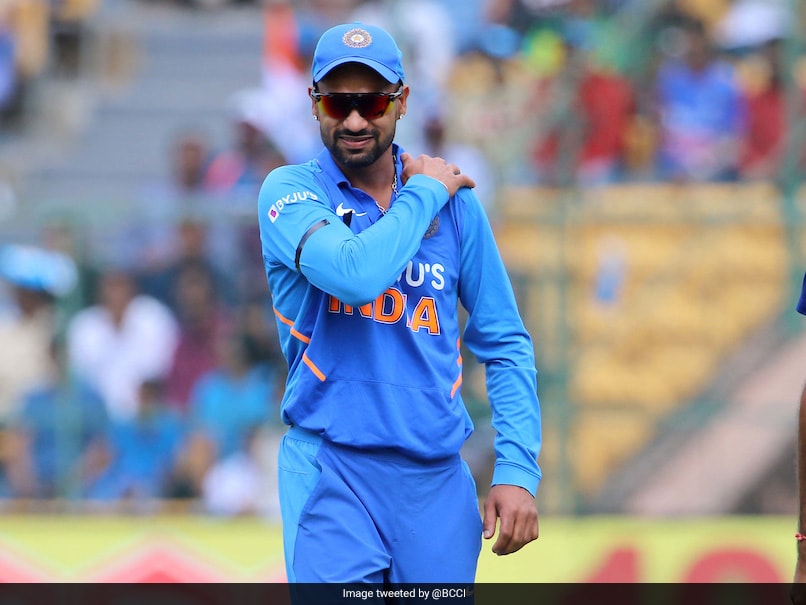 Shikhar Dhawan injured his left shoulder as he dived to save a run in the 3rd ODI.© Twitter

Shikhar Dhawan, who top-scored for India in the second One-Day International (ODI) in Rajkot, hurt his left shoulder as he dived to save a run during the third ODI in Bengaluru on Sunday. Shikhar Dhawan was seen walking off the field. holding his shoulder. The Board of Control of Cricket in India (BCCI) took to Twitter to reveal that Shikhar Dhawan had been taken for an X-Ray and a call on his availability will be taken after assessing his condition. "Shikhar Dhawan has gone for an X-Ray. A call on him being available for the rest game will be taken once he is back & assessed #TeamIndia #INDvAUS," The BCCI tweeted.

Update: Shikhar Dhawan has gone for an X-Ray. A call on him being available for the game will be taken once he is back & assessed #TeamIndia #INDvAUS pic.twitter.com/94I4tlyxzc

In the match, Australia captain Aaron Finch won the toss and opted to bat at the M Chinnaswamy stadium.

The visitors got off to poor start as Mohammed Shami removed David Warner in the fourth over.

Both batsmen were at the striker's end and Shreyas Iyer threw the ball to Shami who whipped the bails to send Finch packing.

Marnus Labuschagne then joined Steve Smith in the middle and the duo put on a stand of over 100 runs.

India captain Virat Kohli pulled off a stunning diving catch to get rid of Labuschagne and break the stand.

Australia tried to experiment with their batting order by sending Mitchell Starc as a pinch hitter but the move backfired as Starc fell for a duck trying to clear the rope, only managing to find Yuzvendra Chahal in the deep.

Shikhar Dhawan India vs Australia 2020 India vs Australia, 3rd ODI Cricket
Get the latest updates on India vs South Africa and check out  Schedule, Results and Live Score. Like us on Facebook or follow us on Twitter for more sports updates. You can also download the NDTV Cricket app for Android or iOS.