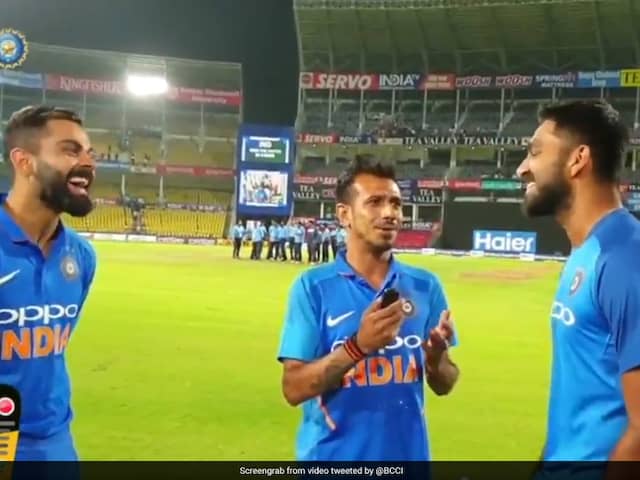 Virat Kohli and Vijay Shankar hogged all the limelight with their brilliant performances.© Screengrab: @bcci

India became the second team after Australia, who have 558 wins, to record 500 victories in One-day Internationals (ODI). Virat Kohli's team achieved the milestone after beating Australia in the second ODI in Nagpur on Tuesday. India successfully defended the modest total of 250 to win by eight runs and go 2-0 up in the five-match series. Skipper Virat Kohli and Vijay Shankar hogged all the limelight with their brilliant performances and they appeared on Yuzvendra Chahal's "Chahal TV" to talk about the hosts' thrilling win.

P.S. Did Vijay continue the rest of his interview in Hindi with @yuzi_chahal?

"We had a discussion on whom to give the final bowler. We had a thought that if a spinner's delivery comes in the radar, then it will be easier to step out and hit it for a six. There was reverse swing on offer for a fast bowler. So, I was hoping that Vijay would be able to reverse swing a bit," Kohli said.

"If he bowls in the right areas, the batsman might go for a swing and miss, which happened on the first ball. And then it reversed a bit on the final ball, and we won. So we were hoping he could exploit the swing on offer. 11 runs were needed in the final over, so I knew it could be easier for Vijay. Because then the batsman had to go for a big hit. And they just had two wickets left," he added.

The Australians needed 11 runs from the last over with two wickets in hand but Shankar, playing only his sixth ODI, kept his nerves to pick a wicket off his first and third balls.

"I was actually ready for it. I was preparing myself for it after the 43rd over. I thought I am going to have to bowl the last over and defend 10 runs. So, it was already there in my mind. So, I was just thinking about what I should do, and I just executed that," Vijay said.

Skipper Virat Kohli, who struck 116 out of India's 250, asked Shankar to bowl the final over ahead of the regular Kedar Jadhav, and he was rewarded amply for his move.

Australia were bowled out for 242 off 49.3 overs with Marcus Stoinis top-scoring with 52.

Now, India will shift their focus to the third ODI, which is scheduled to be played at JSCA International Stadium Complex in Ranchi on Friday.

Yuzvendra Chahal Vijay Shankar India vs Australia, 2018/19 India vs Australia, 2nd ODI Cricket
Get the latest Cricket news, check out the India cricket schedule, Cricket live score . Like us on Facebook or follow us on Twitter for more sports updates. You can also download the NDTV Cricket app for Android or iOS.