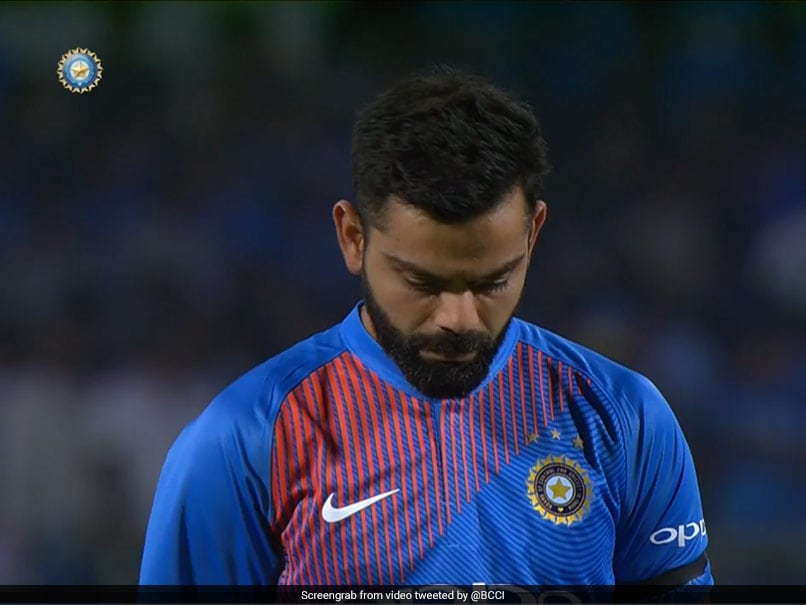 Virat Kohli had to ask the crowd to remain silent.© Screengrab: @bcci

Virat Kohli had to ask the fans at Visakhapatnam to stay quiet during the two-minute silence that was observed to honour the soldiers who died in Pulawama terror attack ahead of the first Twenty20 International (T20I) between India and Australia on Sunday. After the national anthems of both countries were played, a period of silence was observed by the players to pay respect to the 40 CRPF officials who died on February 14. However, many sections of the crowd could be heard chanting loudly during that time, prompting Kohli to ask the crowd to remain silent.

#TeamIndia and Australia pay homage to the martyrs of Pulawama Terror Attack before the start of play today at Vizag.

Twitter expressed anger at the behaviour of the crowd in Visakhapatnam. Here are some reactions.

Two minutes silence was to be kept for our brave soldiers who lost their lives in the Pulwama attack but our people really lack civic sense. Why were they shouting and cheering? #INDvAUS

Absolutely amazed at the number of people shouting 'Bharat Mata ki Jai' in the middle of a minute's silence for the CRPF jawans martyred in the Pulawama attack. Yet another instance of blind jingoism defying logic. #INDvAUS

Look at these morons waving hands or looking in phone during 2min silence. And same people will lecture others on patriotism. #INDvAUS

They called for 2-min silence for our army and we wave at the camera, shout slogans. Zero civic sense. Zero empathy. We are a bunch of hypocrites. #INDvAUS

Virat Kohli, on Saturday, said that he and his team will completely stand by whatever decision the government and the Board of Control for Cricket in India (BCCI) take in regards to playing Pakistan in the World Cup 2019 in England.

Speculation is rife that India might refuse to take part in the World Cup game between India and Pakistan, scheduled to be played on June 16 in Manchester. However, there has been no official announcement from any of the boards.

"Our sincere condolences to the families of CRPF soldiers who lost their lives in #PulwamaAttack. We stand by what the nation wants to do and what the BCCI decides to do," Kohli said at the press conference ahead of the first T20I against Australia.

There has been a growing demand that India boycott their clash against Pakistan during the World Cup, which starts on May 30 in England and Wales, as a mark of protest against the Pulwama terror attack in which at least 40 CRPF personnel were killed and was claimed by Pakistan-based terror group Jaish-e-Mohammed.

Virat Kohli Cricket India vs Australia, 2018/19 India vs Australia, 1st T20I
Get the latest updates on IPL Auction 2023 and check out  IPL 2023 and Live Cricket Score. Like us on Facebook or follow us on Twitter for more sports updates. You can also download the NDTV Cricket app for Android or iOS.