"Have Experience With MS Dhoni, Flair With Kedar Jadhav": Virat Kohli In Awe Of Match-Winning Partnership

India were 99 for four when MS Dhoni and Kedar Jadhav took the charge of the team's run-chase. 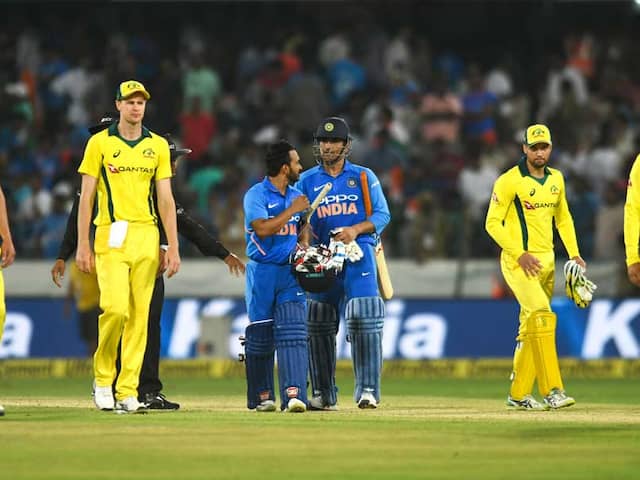 MS Dhoni and Kedar Jadhav strung together an unbeaten stand of 141 runs as India defeated Australia by six wickets in the first One-day International to take a 1-0 lead in the five-match series in Hyderabad on Saturday. Wicketkeeper-batsman MS Dhoni was unbeaten on 59 and all-rounder Kedar Jadhav not out on 81 when India surpassed the target of 237 with 10 balls to spare. India captain was in awe of the fifth-wicket stand between Dhoni and Jadhav and claimed that it set the platform for the home team.

"You have experience with MS and flair with Kedar who is also experienced now. That partnership was outstanding and it was more or less a complete performance. That set the platform," Kohli said at the post-match presentation.

India were 99 for four when Dhoni and Kedar took the charge of the team's run-chase.

"I was speaking to Ravi bhai, and I said this is good. These guys have to do it and they have to get us across the line. The way Kedar and MS took responsibility, it was great to see," the Indian skipper said.

While captain Kohli scored 44 runs, his deputy Rohit Sharma contributed with a 66-ball 37. Shikhar Dhawan was dismissed for a golden duck and Ambati Rayudu managed a mere 13 runs in the chase of 237.

Earlier, Indian bowlers dominated the visitors and restricted them to a below-par total after they opted to bat.

Heaping praise on Mohammed Shami, who led India's bowling attack with two crucial scalps, Kohli said: "The way Shami has come back into the white-ball set-up after his Test performances, have never seen him so lean before. He has lost 5-6 kgs."

"He's running in and bowling so well. The lines and length he's bowling; got Maxi on 40-odd out with a beautiful ball. He has wicket-taking ability and he's hungry for wickets," he added.

Kohli foresees Shami's transformation as a "great sign for Team India" ahead of the ICC World Cup 2019, starting on May 30 in the UK.

"Heading into the World Cup, it's a great sign for Team India. If he can stay hungry like this and look for wickets and he has the ability to back it up with Bumrah and Kuldeep, it's gonna be great to stand in the field and watch," he said.

The second match of the five-ODI series will be played at the Vidarbha Cricket Association Stadium, Nagpur, on Tuesday.

Kedar Jadhav India vs Australia, 2018/19 Cricket India vs Australia, 1st ODI
Get the latest Cricket news, check out the India cricket schedule, Cricket live score . Like us on Facebook or follow us on Twitter for more sports updates. You can also download the NDTV Cricket app for Android or iOS.