Little Master says Australia series has made men out of boys and Team India can afford to make some sacrifices ahead of South Africa tour. 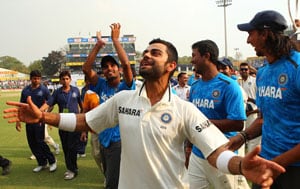 "When you look at a 4-0 win, I don't think it happened too often in the history of Indian cricket. But I think India outplayed Australia in all departments of the game. It's also very very important to understand that this Indian team's performance was a team effort," Gavaskar told NDTV.

"The guys who won the series for India are all youngsters. Ravichandran Ashwin and Ravindra Jadeja chipping in with wickets, two guys scoring more than 400 runs and even contributing handsomely as a captain Dhoni. So it wasn't that the team was dependent on one person but it was the core group that came to the party and did extremely well," said the former India captain.

Gavaskar also believes that the young Indian team is ready to take on the tough world of Test cricket.

"I think the Indian team is ready. Whether they will make the same kind of impact outside India is yet to be seen. But there has been development of lot of players from being fringe players to good players to being top players. That is a big plus for India after this series."

Both India and Australia have won in their own backyard with identical 4-0 margins. But Gavaskar believes it is tough to say which is a better team.

"Teams are always hard to beat at home. I agree India lost 2-1 to England because they had bowlers to exploit Indian conditions. However, Australia lacked that quality in the spin department and Nathan Lyon was left all alone."

With South Africa tour coming later this year, Gavaskar was of the view that India need to start their preparation from now on.

"India need to plan for South Africa now. If they have to make a few sacrifices may that be. I think India have a fair chance of doing well over there as well because we have quality now and they need some opportunity to bloom."

Ajinkya Rahane failed in both the innings of his debut Test, scoring 7 and 1, respectively. But the original Little Master backed the fellow Mumbaikar.

"It will be wrong to judge any player by just one match. Rahane should be given more opportunities. Whether it will be in a home series or overseas that we will have to see. Maybe, he will do well in away series because sometimes youngsters do well overseas when expectations are not high. Team management need to show faith and be patient with him," concluded the 63-year-old.

Comments
Topics mentioned in this article
Cricket India Cricket Team Australia Cricket Team Shane Watson Sreesanth Ravindra Jadeja Ajinkya Rahane Ravichandran Ashwin Sunil Manohar Gavaskar India vs Australia 2013
Get the latest updates on SA vs IND 2021-22, check out the Schedule and Live Score . Like us on Facebook or follow us on Twitter for more sports updates. You can also download the NDTV Cricket app for Android or iOS.