It was Sakshi's tweet which informed Puja of her husband's double century versus Australia on Day 3 of the Hyderabad Test. 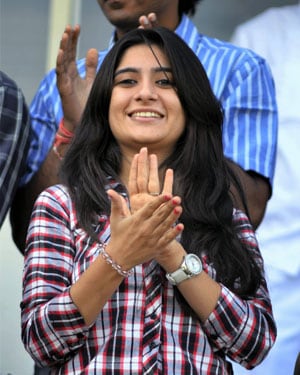 Cheteshwar Pujara's wife, Puja's joy was doubled when she was made aware of captain MS Dhoni's wife Sakshi's tweet just after Pujara reached the 200-run mark on Monday.

"I didn't know... I am thrilled and excited with her message," Puja said from Hyderabad.

What was Puja's message to her husband as he left for the ground to resume his innings yesterday? "I only wished him for the day. There was no mention of 200 runs. 'Chintu' (Pujara's nickname) knows his job well. But now, I can't wait to congratulate him," Puja said last evening.

Puja doesn't read too much into talk that their marriage has brought the batsman luck. Neither did she rate his two double tons (the first came against England at Ahmedabad last year). "It is HIS hard work and sheer dedication that helped him score those runs," she remarked.

Comments
Topics mentioned in this article
India Cricket Team Australia Cricket Team Cricket Sakshi Dhoni MS Dhoni Cheteshwar Pujara India vs Australia 2013
Get the latest updates on ICC Women's Cricket World Cup 2022 and IPL 2022, check out the Schedule , Live Score and IPL Points Table. Like us on Facebook or follow us on Twitter for more sports updates. You can also download the NDTV Cricket app for Android or iOS.