Virender Sehwag and the tale of batsmen with spectacles

Sehwag was seen wearing spectacles at the Indian team's preparatory camp in Bangalore and may retain his glasses when he comes out to bat against Australia. 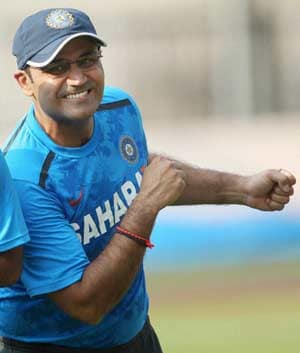 The Border-Gavaskar Trophy will afford Virender Sehwag an opportunity to get over his recent blues against an opposition that has denied him a century for 10 Tests now.

Sehwag was seen wearing spectacles at the Indian team's preparatory camp in Bangalore and it shouldn't be a surprise if he comes out to bat in the opening Test against Australia at Chennai (February 22-26) with glasses on.

Sehwag's coach AN Sharma informed MiD DAY on Monday that the dashing opener batted with spectacles in the nets back home in Delhi before heading to Mumbai for the Irani Cup which he eventually did not figure in due to a stomach ailment.

"He has a minor number. He was fine in the nets," Sharma said.

If Sehwag decides to get 'aided' while facing the Aussie bowlers, he won't be the first Indian opener to do that. The late Pankaj Roy wore spectacles and so did Sehwag's former India coach Anshuman Gaekwad. Sourav Ganguly, on the other hand, wore contact lenses while batting.

Roy's son Pranab told MiD DAY that his father had some difficulty in sighting the ball on the tour of England in 1952 (five ducks in his seven Test innings). He later went to the West Indies and on his return happened to go an eye specialist primarily to get his mother's problem sorted out. He then asked the specialist to check him as well and thus Roy started wearing spectacles.

"I remember speaking to my father about this and he told me that he could see the ball so much better. The eye problem caused his run of low scores in England, but he didn't want to bring that up because people would view it as an excuse. But he was much better with the glasses," said Pranab, former India opener and national selector.

Well equipped with glasses Roy Sr put on 413 for the first wicket with Vinoo Mankad against New Zealand in 1956, a world record till South Africa's Graeme Smith and Neil McKenzie went past the mark against Bangladesh in 2008.

Comments
Topics mentioned in this article
Cricket India Cricket Team Australia Cricket Team Virender Sehwag India vs Australia 2013
Get the latest updates on ICC Women's Cricket World Cup 2022 and IPL 2022, check out the Schedule , Live Score and IPL Points Table. Like us on Facebook or follow us on Twitter for more sports updates. You can also download the NDTV Cricket app for Android or iOS.