This defeat will shake up Australian cricket: Dean Jones

The cricket expert minced no words in his damning assessment of Australia's performance during their disastrous tour of India. 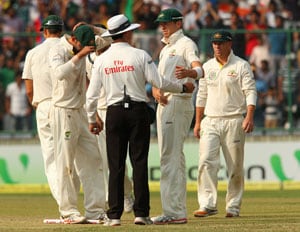 It wasn't the best of birthdays for NDTV's cricket expert Dean Jones. And understandably so!

Australia were blanked 4-0 in the Test series against India, and the former Aussie batsman was adamant that drastic measures need to be taken to resurrect the fallen powerhouse.

"In Australia we are ruthless when it comes to a team not performing up to standard. If this was an Aussie Rules Football team, the coach and the players would have been slaughtered by now," said Deano.

The players will have to take much of the blame for the disastrous tour of India. With back-to-back Ashes series to follow later this year, Australian cricket is arguably in need of a major overhaul.

"It all comes down to preparation," said Deano. "We just aren't good enough at the moment. Be it turning pitches or seaming tracks, this team is not up to the mark."

Phillip Hughes looks the most likely candidate to make way in the Australian batting line-up. The No.3 batsman has looked far from assured, despite some decent starts. Usman Khawaja looks most likely to take up the position Ricky Ponting made his own.

In ten days' time, Glenn Maxwell will earn over a million dollars for turning up in Mumbai Indians' colours during IPL 6. Yet the man known as 'Big Show' in Australia has scores of just 13, 8, 10 and 8 in his four Test innings, He was even tried as an opener during the last Test!

The latest word in the cricketing lingo is 'the Cowan'. A leading cricket website describes 'a Cowan' as every 100 balls faced by a batsman, without scoring too many. Australian opener Ed Cowan's batting style is the inspiration behind the terminology. "You reap what you sow," added Deano, a damning indication Australia's selection policy. "The Aussies have been mauled here. Some of the lads will have to go back home and work on their game."

But Deano managed to bring in some birthday cheer to the Australian performance.

"But, let's just remember that these are young kids. Maybe this defeat will hold them in good stead for future tours and possibly an Ashes victory," said Deano, more in hope than expectation.